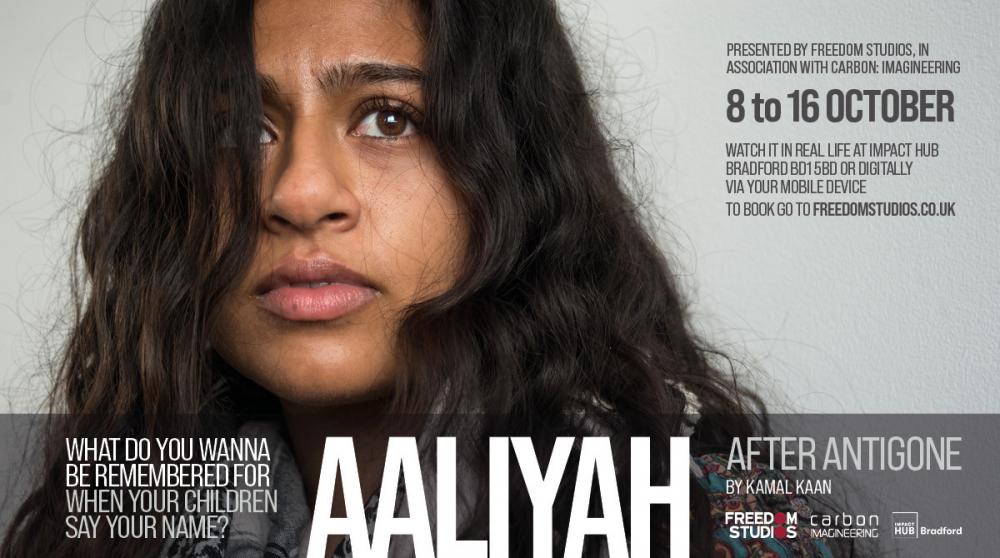 From Freedom Studios, the producers of the acclaimed Black Teeth and a Brilliant Smile and Brief Encounters at Bradford Interchange and CARBON: Imagineering, comes Aaliyah: After Antigone, the premiere of Kamal Kaan’s new contemporary adaptation of Sophocles’ Greek tale, examining the fragile nature of citizenship and making us question our own relationship to ourselves and our country.

Directed by Freedom Studios co-artistic director Alex Chisholm and Dermot Daly, the new adaptation will simultaneously premiere as a live and digital online experience at Impact Hub Bradford from 8-16 October.

Set in the Local Authority offices in Bradford, Aaliyah: After Antigone follows the plight of British Bangladeshi sisters Aaliyah and Imani as they try and save their brother Syeed who has been deported by the Home Office. Aaliyah must rise up and face the might of the Home Secretary - Parveen Parvaiz, but Aaliyah’s political activism puts her own life in danger.

The cast of Aaliyah: After Antigone will feature Halema Hussain (Does My Bomb Look Big In This?, Soho Theatre/Tamasha Theatre/Nyla Levy and most recently in the film Supernova alongside Colin Firth and Stanley Tucci) as Aaliyah; Lydia Hasoon (Unseemly Women – Queen, Hope Mill Theatre) as Imani; Jag Sanghera (Mela, Leeds Playhouse, Coronation Street, ITV, and the film Tyrannosaur) as Hussain and Siddiqua Akhtar (Papa Was A Bus Conductor, Lyric Hammersmith and Tour) as Parveen. The production is designed by Miriam Nabarro (I Told My Mum I was Going On A RE Trip, 20 Stories High/Contact Theatre) and features sound designed by Ed Clarke (Frankenstein, National Theatre; A Christmas Carol, Hull Truck Theatre and The Canary and the Crow, Middle Child).

Bradford based Kamal Kaan has written for stage, screen, and radio. His credits include Fathers Land in Mother Tongue – Afternoon Drama (BBC Radio 4); On the Hearing The First Cuckoo In Spring (Leeds Playhouse/BBC Radio Leeds); Breaking Up With Bradford (BBC Radio 4); Headline Ballads: Whilst the Water Weeps Next to the Water (BBC Radio 4) and The Weather Machine (SkyArts/ Leeds Playhouse/ Stage@Leeds.). Most recently, Kamal was Story Consultant on Clio Barnard’s Ali + Ava, written and directed by the award-winning Clio Barnard and selected for this year’s Cannes Film Festival.


Playwright Kamal Kaan said:
“This modern adaptation of Antigone is about taking the essential drama from the original and transplanting it in to our contemporary world. The two sisters Antigone and Ismene are now Aaliyah and Imani: two British-Bangladeshi sisters. With their own citizenship under threat, the play becomes a fierce battle of loyalty, family, love, and politics, all set within the landscape of Bradford.”

Director Alex Chisholm added:
“We commissioned Aaliyah: After Antigone in late 2019 as a live/digital hybrid. Kamal, Carbon: Imagineering and Freedom Studios had previously collaborated in re-creating Tajinder Singh Hayer’s North Country as a streamed performance for Facebook Live. Fascinated by the theatrical possibilities of the digital medium, we wanted to create a piece that was digital and live at the same time. The story of Aaliyah was the result, simultaneously present (at Impact Hub Bradford) and remotely digital (on your device) experiences, which are equal but different. The past 18 months has underlined the relevance and resonance of this story, both in our enforced embrace of all things digital, but also the question of who gets to belong, who gets to be sacrificed, and who has to fight back.”

Bradford-based Freedom Studios is an award-winning intercultural theatre company, which connects different people and communities through storytelling and making theatre. Engagement is intrinsic to their work, and communities are at the heart of what they do. Recent productions have included the critically acclaimed Black Teeth and a Brilliant Smile, When We Were Brothers, North Country, and Brief Encounters at Bradford Interchange.

CARBON: Imagineering is a boutique digital innovation and R&D practice, focussing on the application of emerging technologies, with a long history in developing XR and storytelling technologies. Carbon’s “GLAMlab” research programme has led to collaborations in the arts and culture sector, where galleries, libraries, museums, and archives can experiment new technologies. These include: Yarn, a co-designed community storytelling platform. Virtual Vikings, a concept role playing game exploring Viking culture and BD Stories, a series of livestreamed, theatrical dramas.


Aaliyah: After Antigone runs at the Impact Hub Bradford from the 8-16 October.