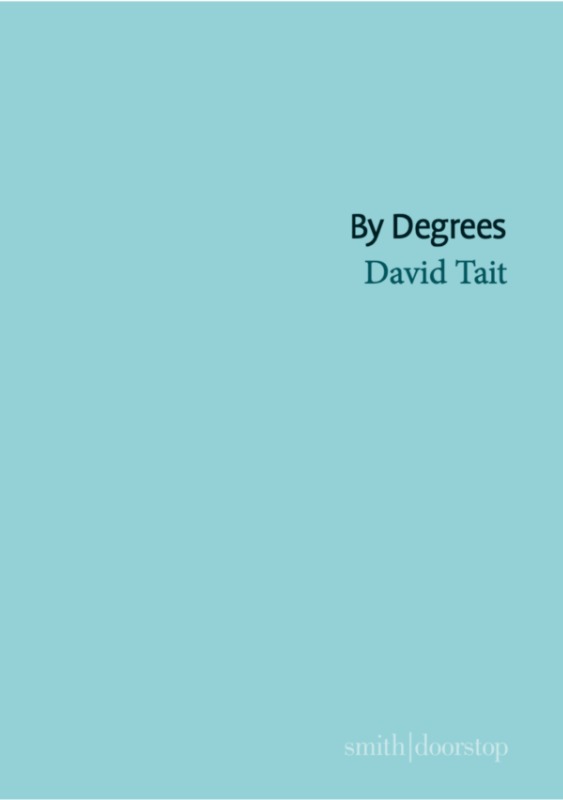 The total number of Covid deaths recorded in China as at 3rd October – 4636 - might look unrealistic at first glance. In a nation that painstakingly stage-manages its own reputation abroad, and is structurally reluctant to divulge information about its demographic and sociological patterning, robust mechanisms of state control, propaganda and censorship could easily disguise a much higher figure. But lockdowns in China would have followed the iron inflexibility of the term’s meaning with no let or margin, perhaps on pain of extreme punishment for transgression.

Such suggestions are barely concealed in David Tait’s fascinating new pamphlet of poems about life beneath the yoke of Covid In both China and the UK, whose themes examine similarities and differences in national approach. Tait lives and works in Shanghai and By Degrees takes up where his earlier collection for smith|doorstop, The AQI (2018), left off. A resoundingly efficient purveyor of irony, the poet looks in a two-way mirror to reflect processes of both social coercion and the limits of democracy, and to test how such dynamics have been shaped by the pandemic.

There is much else, too, to shake our tree of complacency. One of the starkest poems here, ‘Censors’, describes the means by which an individual is gradually reduced to the status of cypher before being extinguished as efficiently as if he never existed. Tait’s spare couplets catalogue a process of social ‘disappearance’, mandated by a system of checks and balances which differs from western culture only in degrees of severity. The power of social media as a tool of ‘cancellation’, and in this instance abetted by the ruthlessness of state sponsorship, makes a paradox of power, its meanings and (ab)uses:

‘My friend posted how funny it was that an empty chair
could hold more power than a chairman.

The manipulation of information, in the sombre examination of a collapsed bridge in ‘Wuxi’, retouches the high death-count in the pastel shades of the party line. Tait’s simple, gruesome imagery – ‘how bumpers of cars poked from walls / like bad teeth’ – might so easily be airbrushed from view, as the blame is moved ‘from structural integrity to overweight trucks’.

An authoritarian stranglehold is observed first-hand and with some detachment in ‘By Degrees’; partiality is declared tonally, as a substratum of gathering restriction and anxiety. The title poem holds a steady temperature, as though exceeding 37 degrees was tantamount to an infraction. And beneath the narrator’s inventory of shortages and delimited freedoms, the reader senses his increasing unravelment, before re-focusing for the quiet desperation of the purposeless flâneurs of ‘The Virus at My Window’, whose washed-out and languid tercets describe a shadow-approximation of existence:

‘It’s heading this way, and everyone on the street
stops to watch it. It’s passing, it isn’t slowing down.
The people on the street breathe, then keep walking.’

Tait’s poems are riven by ambiguity; several are submerged beneath the weight of ennui, or an inability to be free of the torpid introspection which is occasioned by omnipresent anxiety. The numbers of Chinese dead may be held in check by draconian measures, but where, in the UK, such an imperative is undermined by those who cry freedom and are less than inclined to collective preparedness or obedience, the outcome has been palpably catastrophic. A point darkly made in the fine, sardonic study of ‘The Pitch Invasion’ which interprets the numbers of dead in terms of a football crowd of cadavers, lest we were unable to apprehend the full scale of the nightmare. Here, Tait performs one of many poetic pirouettes by replacing the voice of elegy with that of satirical anger, and it works to brutal effect:

‘and if the numbers seem abstract, think of the stadium
of your local team, the dead already taking up each seat,
both dugouts, and spilling onto the pitch.’

Our initial insouciance, neatly embodied in the portly buffoonery of Boris Johnson, is taken to task in another satire, where relentless repetition of his job title becomes a judgement against him. Clearly composed at the time of the PM’s hospitalisation, ‘Get Well Soon, Prime Minister’ wraps the poet’s wishes in a final desperate rejoinder to us all – ‘I hope this isn’t the end’. As it was for so many, when the numbers of dead burgeoned exponentially, outstripping our worst expectations. Moving from the prone figure of one of the earliest to die in Wuhan, ‘who lay back as if looking at the sky’, we move on to an England of the worst case scenario in the acerbic ‘Candles’ where the narrator’s votive offerings are not adequate to the task of commemoration. Tait’s anger, here and elsewhere, is clear-eyed and directly addressed:

‘Don’t be seduced by convenient truths
or I might light a candle for you.’


Also by Steve Whitaker...
Poem Of The Week: 'That I Could' By Jane ClarkePoem Of The Week: 'Bertram' By Nigel FordeStepping Into the Light: Genesis at Leeds ArenaThere Could Be Temples: Still By Christopher MeredithPoem Of The Week: 'One Cigarette' By Edwin Morgan (1920-2010)
But most we sense helplessness in the face of circumstances beyond our control. If Tait flails, he does so with astonishing intelligence and a facility for incisive images, like the terrible spectre of crammed crematoria and doctors desperate to defeat death before they, themselves, succumb to it, in a parody, almost, of Donne’s religious certainty (‘The Skype Funerals’). Or the ‘mewling’ of an ambulance siren (‘The Virus at My Window’), and a cruise liner unable to dock (‘Sonnet’). Tait is fully conscious of the propensity for dystopian absurdity in a landscape where conventional signifiers sink into a pit with the dead and the terminally weakened.

The scale of the problem renders even the obscurest detail poignant: we are obliged to measure Tait’s tenderest moments against the presence of forgetfulness, stunned vacancy and winter smog drifting like a ‘sinister mist’. The pandemic, like an encroaching, all-encompassing tsunami, is insinuated into the mood-music of poems like ‘Remembering Glen Torridon’, ‘The Last Road Trip’, ‘The Snowline’ and ‘At Tianchi Lake’, tempering them with the re-inflamed beauty of contrast. Places of elegy, recourse and abandonment, their terrain take on an aeonic character, as though the strange meetings, the wild skies and the ‘whispering trees’ might yield a benediction in a sense of permanence. The Precambrian magnificence of the ancient mountains of northern Scotland conjures a time of conflagration and tectonic ‘groyning’, and, in David Tait’s envisioning, they are consoling.

where there are more stags
than people, where snow poles

mark the road for the deep
slow snows of winter.’ (‘Remembering Glen Torridon’)


By Degrees is a work of focused brilliance.

By Degrees is published by smith|doorstop.