Roadmap recommendations include:
Publishing the much-anticipated Energy White Paper and National Infrastructure Strategy this Autumn to unlock business investment
Using the upcoming Budget to prioritise public spending on low carbon projects and game-changing technologies such as hydrogen and carbon capture, and
Major decisions from Government which lead to new green jobs and infrastructure projects that will drive UK economic recovery.

Launching the CBI’s Green Recovery Roadmap, Carolyn will say “action speaks a thousand times louder than words” - calling on the Government to take ambitious steps nationally and use the rest of the year to reignite global efforts to achieve net-zero by 2050.


"Together business and government can lay the foundations for a strong, sustainable future. Not just for the UK, but through our global leadership..."

Looking ahead to COP26, Carolyn will say business and government must lead by example and put the country on the map as a top destination for low-carbon investment.

Dame Carolyn Fairbairn, CBI Director-General, is expected to say: “For so many, this feels like a time of fiercely competing goals. The world faces two seemingly separate yet fundamental problems. Covid-19 – the biggest health crisis in living memory and climate change – the defining challenge of the modern era.

“But they are not separate. The response to one affects success on the other. And the defining question is, how does the UK use this moment to rebuild our economy and the greener and stronger world we want to return to.” 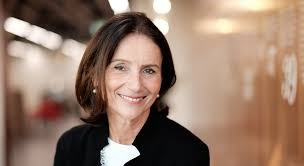 Director-General Dame Carolyn Fairbairn
On fast-tracking the UK’s race to net-zero, Carolyn will say: “Business has been promised and is waiting for the Government’s climate blueprint - the Energy White Paper, National Infrastructure Strategy, as well as plans for the decarbonisation of transport, heat and buildings.

“Enabling firms to strike ahead with their investment plans for a net-zero future with confidence. There’s no more powerful way to unlock private investment for the UK and set the agenda and pace of COP26 negotiations.”

On international leadership, Carolyn will say:“The UK is in pole position to lead the world in green tech – hydrogen, carbon capture and storage. We have the science, ambition and expertise to succeed.

“As COP26 Chair and holder of the G7 presidency next year, the UK has a unique opportunity to prove itself a global climate leader post-Brexit. Securing ambitious international commitments and taking action towards our own net-zero transition.

“Together business and government can lay the foundations for a strong, sustainable future. Not just for the UK, but through our global leadership, beyond our shores as well. A to-do list for this generation to pass on a better world to the next.”

Accelerate the delivery of electric vehicle charging points and introduce a net-zero mobility credit scheme, alongside Government funding for a UK-based Gigafactory (battery manufacturing for electric vehicles).
Lifting the cap on auctions for renewable power and introduce a financing model to encourage domestic and international business investment in new nuclear capacity.
Become a world leader in carbon capture, utilisation and storage (CCUS) technology – by introducing a privately-financed Regulated Asset Base model and developing plans for an auction mechanism for CCUS.
At least £1 billion of Government funding for hydrogen testing programmes and introduce a variant of the Contracts for Difference auction for the production of hydrogen.
Create an Office for Sustainable Aviation Fuels to secure the development of low-carbon alternatives and commit £500 million of matched public-private funding (£1 billion in total) to support the UK’s first commercial sustainable fuel plant.
Deliver jobs and energy savings by retrofitting homes and buildings to be more energy efficient and switch to low-carbon heating. And for Government to publish its Heat and Buildings Strategy

Also by Andrew Palmer...
Chinese Business Calls For New Chapter With UK As Firms Prepare To Invest Billions In Brexit BritainYorkshire's First Single Malt Whisky Distillery To Host Christmas Virtual Tasting Session"We Will Bounce Back" - PM Message To CBI ConferenceBuild Back Better And Keep As Much Of The Economy Open As We Possibly Can Says CBI ChiefTUC And FSB Join Forces To Stop Nightmare Friday 13th Cut In Support For Covid-impacted Self-employed