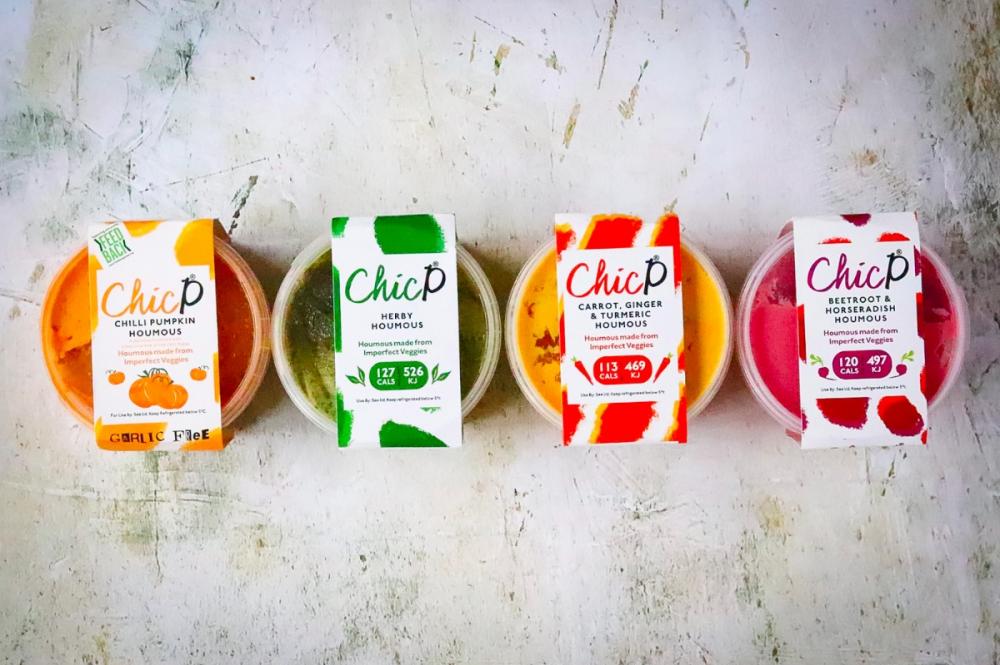 ChicP creates delicious and healthy veggie bites, hummus and dips from surplus wonky veg. They are encouraging the nation to waste less and eat more of what’s left in the fridge, even past it’s sell by date. Many may not know their vegetables, fruit and herbs are still completely safe and tasty to eat from a bendy carrot, to wilting coriander the smallest amount can still be whipped up into something nutritious.

On average, UK households produce a staggering seven million tonnes of food waste every year and the majority of this is still good to eat.

ChicP the creators of delicious and healthy veggie bites, hummus and dips, made from surplus wonky veg has just launched and now stocked in Booth Supermarkets (RRP: £1.99).
It is also available in individual pots and 1kg tubs, sold online and in health food stores across the country, including Wholefoods, Ocado, Booths, Co-op and Amazon Fresh RRP £1.99.
In the last 12 months ChicP has used over 30,000 wonky vegetables and they now want Brits to tackle their own food waste at home, using some simple tips and tricks to understand when to throw your fruit and veggies away:

Browning? On apples, bananas and potatoes that’s absolutely fine! The skin is just there to protect the inside which is still safe to eat. Brown bananas are great for banana bread, but also sweet dips. Just blend them with cocoa and chickpeas, as well as honey or date syrup.

Bruising? It may not look as appealing, but as long as the skin hasn’t been punctured it will still be safe to eat.

Wilting or softening? This is just the produce losing moisture. Try roasting, boiling or blending wilted vegetables to create endless recipes , and use up your leftover herbs whilst you are at it!

Rotting? Whilst rotting vegetables are not something you’ll want to eat, the bacteria are not actually toxic, and rotting portions can usually just be removed. Try cutting off the rotten section and adding the rest of the vegetable to a dip. It only takes half a carrot to make one pot of ChicP hummus as vegetables expand so much when blended.

Scarring? These are just marks that develop in the growing process, they don’t affect the edibility.

Mould? Use your smell and sight! If your fruit or vegetables are mouldy or green inside, or if they are slightly fuzzy with a mouldy smell then that’s the time to finally say goodbye.

The company was founded by former chef and female entrepreneur, Hannah McCollum, who wanted to tackle the UK’s food waste crisis in the most delicious of ways. Now, Hannah wants the nation to give their surplus vegetables a second chance in the fight against unnecessary food waste.

ChicP founder, Hannah McCollum, comments: “Up to 40% of British crops are rejected because of their shape or size, but at ChicP we never turn a wonky vegetable down! If you’re unsure about using raw vegetables that are going off, why not cook them first then blend them which will increase the shelf life of the dip. This will also bring out the flavours and consistency of vegetables like tomatoes.

There will always be a way to prevent food waste, we just need to be a little more creative in the kitchen. Just half a leftover bendy carrot can create a delicious dip for a family meal.