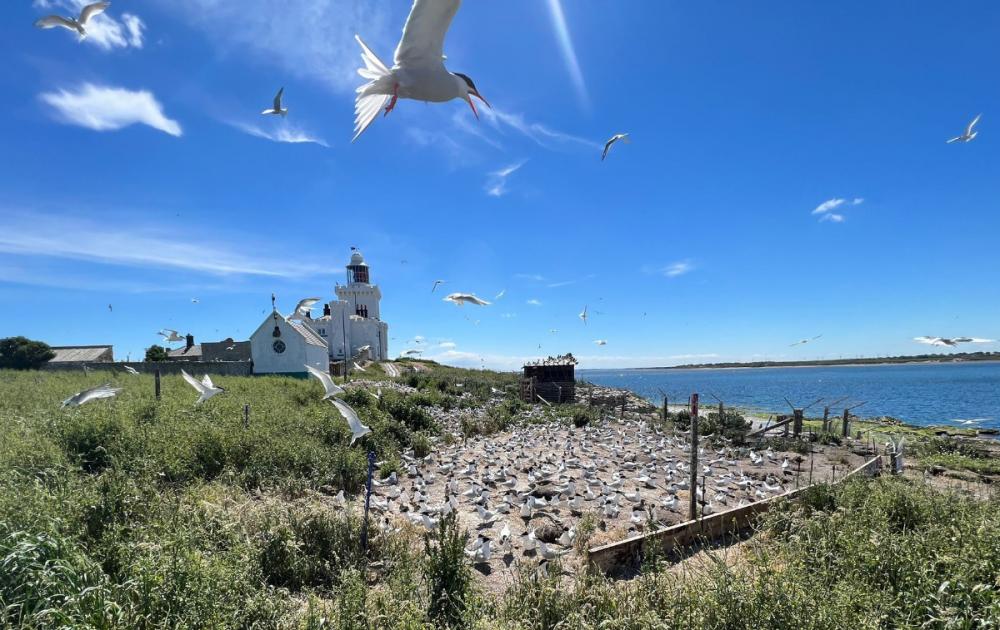 A new virulent form of bird flu that originated in poultry in east Asia has now killed tens of thousands of wild birds in the UK and around the world. It has had major impacts on populations of wild geese and seabirds across Scotland, and in recent weeks hundreds of birds have died on Coquet island, with several species affected. Samples sent to Defra have now tested positive for Highly Pathogenic Avian Influenza (HPAI). The virus is also believed to have caused the deaths of thousands of seabirds across Scotland, with an increasing number of confirmed cases appearing across England.

The RSPB is demanding UK governments act now to develop and implement an immediate response plan to address HPAI in wild birds, as well as national seabird conservation strategies that will build resilience in our populations over the longer term.


Tern chick on Coquet Island - credot David Morris
Situated off the coast of Northumberland, RSPB Coquet Island is a wildlife sanctuary of international significance, home to an estimated 82,000 seabirds. It is an important site for nesting puffins, and common, Sandwich and Arctic terns. It is also home to the UK’s only roseate tern breeding colony – a species driven close to extinction in the 19th century by the plumage trade.

Conservation efforts have led to the island’s roseate tern population climbing from 104 breeding pairs in 2016 to an expected 160 pairs this year, with 2022 being the seventh record breeding season in a row.


RSPB site manager Paul Morrison said:
“Our work on Coquet Island is all about providing a safe space for these birds to breed. This year we have had record numbers of roseate, Arctic, Sandwich and common terns. The kittiwake population is also the highest it has ever been.

“To go from enjoying another record breeding season and our best year ever, to facing the threat of this disease is a terrible blow. The terns in particular are all with chicks, and when the adults die, so do the young birds. We are doing all we can to prevent the spread of this virus but are incredibly concerned about its potential to impact what is an internationally important seabird colony.”

All four species of tern on the Island have been affected by Avian Influenza, along with eider ducks, black-headed gulls and large gulls. The sanctuary is also an important site for nesting puffins, but no deaths of this species have been recorded so far.


Aerial view of Coquet Island - credit David Wootton rspb-images.com
As a wildlife sanctuary, RSPB Coquet Island is not open to the public and staff activity on site is being minimised. Fencing has been built to help prevent birds moving between different parts of the colony and spreading the disease through physical contact.

If you come across dead or sick birds, do not touch them. Instead, please report them as soon as possible to the DEFRA helpline on 03459 33 55 77. Dog owners should keep their pets on a short lead to reduce the risk of them coming into contact with sick or dead birds, and to minimise disturbance.


Jim Wardill, RSPB England operations director, said:
“Bird flu is having a devastating impact on our seabirds – a population already under huge pressure from human impacts including climate change, lack of prey fish, deaths through entanglement in fishing gear and development pressure.

“Action must be taken now, with UK governments leading on developing and implementing national response plans for HPAI in wild birds. It is vital to have a coordinated approach to surveillance and testing, disturbance minimisation and public messaging, along with a joined-up strategy regarding arrangements for the poultry sector.

“There also needs to be clarity on the process for collecting dead birds, and a real and lasting legacy for the Biosecurity for LIFE project to address serious threats facing the UK’s breeding seabirds and build their resilience in the face of this emerging crisis.”

In response to the crisis, the RSPB is running an emergency appeal. Donations will enable the charity to respond to the outbreak and help seabird numbers recover in the future. More information and details on how to donate can be found at rspb.org.uk/avianfluappeal

If you come across dead or sick birds, do not touch them. Instead, please report them as soon as possible to the DEFRA helpline on 03459 33 55 77. More information on Avian Influenza, including what it is, what do to if you find a sick bird and updates on recent outbreaks can be found on the RSPB website.