The main construction work on the region’s latest motorway upgrade, along the M56 in Greater Manchester and Cheshire, will get underway this month.

The four-mile section of motorway between junction 6 at Hale and junction 8 at Bowdon is one of the busiest in the North West – carrying 100,000 vehicles a day as part of the important corridor between Manchester and Manchester Airport and the Midlands. 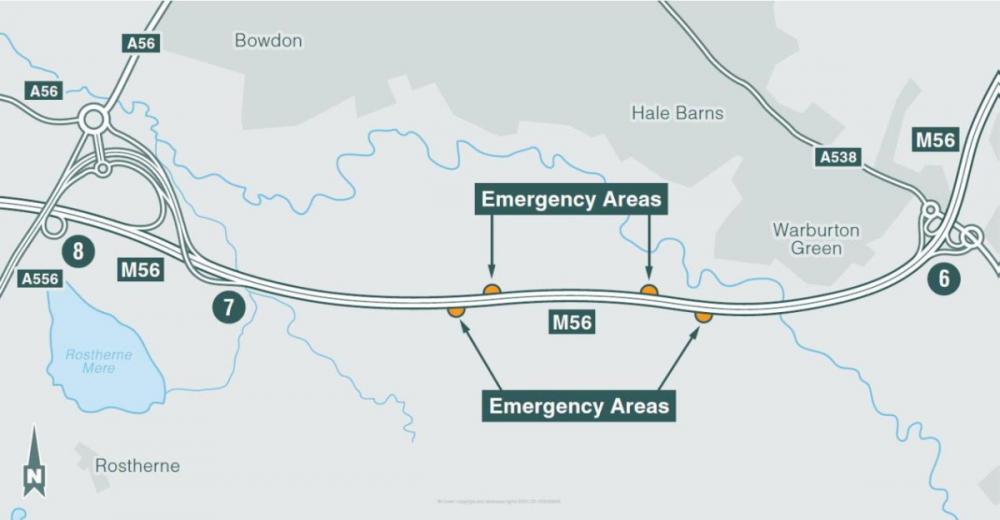 Map showing the extent of the motorway upgrade between junction 6 and junctions 7 and 8 and locations of four emergency areas
As part of the project, an extra running lane will be added to both the westbound and eastbound carriageways to tackle congestion and provide more reliable journeys for city centre commuters and businesses as well as tourists and workers using the airport. Technology will also be installed to manage vehicles through the upgraded motorway - providing smoother journeys – and four emergency areas will provide refuge in the event of break downs or other emergencies.

Highways England’s preparations for the £85 million upgrade started in the spring but the main construction work will get underway at the end of the month with traffic management along the motorway for the first time. A contraflow system will be in operation from the start – helping to reduce the number of carriageway or full motorway closures needed during construction.

“The start of the main construction work is a significant milestone for this project which will ease congestion and make journeys more reliable once it opens to drivers in 2022.

“This is one of the busiest sections of motorway in the North West but using the contraflow system during construction will allow us to keep all the motorway lanes open during the day with occasional overnight lane and carriageway closures.”


Graphic showing the typical layout of a motorway contraflow system which is being used on the M56 to keep all three lanes of the motorway open in each direction during the construction and reduce the use of overnight carriageway closures
The eastbound hard shoulder will be converted into a running lane first with work switching to the westbound hard shoulder late next spring, followed by construction of a concrete central reservation barrier between the three junctions from September. Systems installation and testing after that should see the smart motorway to open to traffic by spring 2022 at the latest.

In detail, the work involves:

Erecting new emergency roadside telephones in each emergency area to provide a direct, location-pinpointing connection to the regional operations centre near Warrington

Highways England is working closely colleagues on other projects in the area such as the M6 Junction 19 roundabout scheme and M62 junction 10 to 12 upgrade, as well as with key stakeholders like the Manchester Airport Group (MAG), local football clubs and shopping centres, to coordinate and plan the overnight closures and other traffic management.


The M56 between Hale and Bowdon is one of the busiest stretches of motorway in the region. As part of preparations for the upgrade construction, average speed cameras (pictured above in the westbound carriageway towards junction 7) have been installed. They will operate only after a contraflow system is installed as part of the roadworks for the project later this month.
Major motorway upgrades in the region are supporting the Northern Powerhouse agenda to improve connectivity and provide the infrastructure to support future jobs and housing.

As well as tackling current congestion, the upgrade will help support future homes and jobs in the area – including the Airport City project bordering the motorway. It will also complement other major improvements along the important Midland to Manchester corridor including motorway upgrades along the M6 in Staffordshire and Cheshire, the M6 junction 19 roundabout improvement and the new A556 Knutsford to Bowdon bypass.

More information, including an option to sign up for regular project updates by email, is available on the project website https://highwaysengland.co.uk/our-work/north-west/m56-junction-6-to-8-smart-motorway/