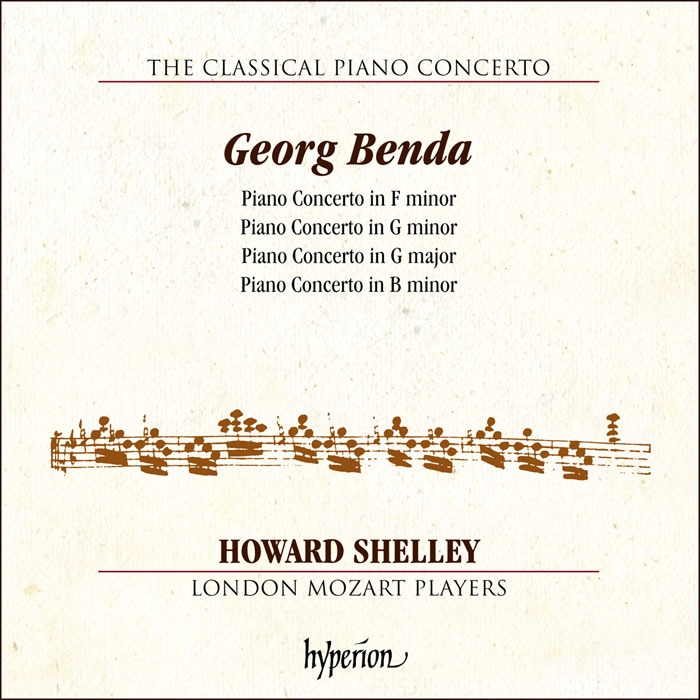 Benda, according to Jeremy Nicholas, is more highly regarded by posterity for his operas than his keyboard music and, along with CPE Bach, Johann Stamitz, and others, was responsible for the musical bridge between the Baroque and Classical periods of music.

As part of Howard Shelley’s exploration delving into the classical piano concerto, he has chosen to highlight Georg Benda’s compositions which make for enjoyable listening and follow the German model of mid-eighteenth century concerto, based on a three movement (fast-slow-fast).

Shelley directs the London Mozart Players from the keyboard bringing out the nuances and rhythmic vivacity along with other finer points of the repertoire especially in the lovely middle movements of each of the concertos.

The dialogue between orchestra and soloist is well-balanced especially when the London Mozart Players accompany the soloist.

One has to admire Shelley’s enthusiasm and energy for unearthing a constant stream of gems worth hearing. Benda with his often look to Mozart, has composed some fine concerti, particularly the two outer works that begin and end this CD. The F minor and B minor each demonstrate liveliness with the F minor's slow movement deploying muted strings, which as is pointed out in the notes, looks to the future, with material which at some moments would not be out of place in an early Romantic concerto. The Arioso and Allegro of the B minor demonstrate Benda’s expressive musical personality and why it was right to include him in Shelley's survey looking at the classical piano concerto.
Also by Andrew Palmer...
Weekend Interview: Putting A Smile On The Face Of The NationKey Moment As Historic Leeds Town Hall Organ Pipes Down For Major RevampI'm Dreaming Of A ... Or Perhaps Not!Weekend Feature: Spreading The Spirit Of Yorkshire Far And WideWeekend Dining: The Fat Badger