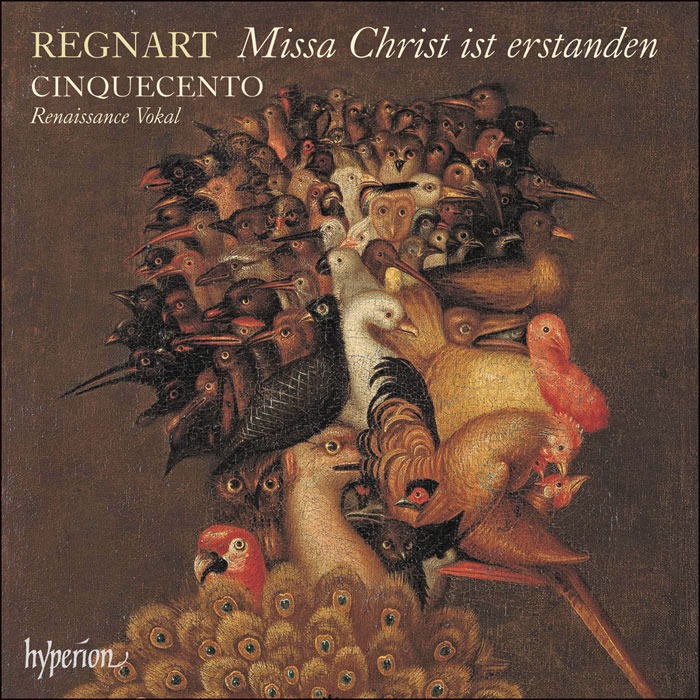 Hyperion has once again skillfully captured the spirit of Renaissance polyphonic vocal music in this glorious recording of Dutch composer, Jacob Regnart, who lived in the middle of the 16th century.

In addition, Cinquecento’s five professional singers originating from five European countries (Austria, Belgium, England, Germany and Switzerland) ensure the recording has an authentic feel harking back to the imperial chapel choirs of the sixteenth century. The recording venue has been well chosen, Kartause Mauerbach, Vienna, a former Carthusian monastery, founded in 1314, rebuilt in the 17th and 18th centuries.

The musicianship, accuracy, clarity and quality of the vocal lines demonstrates Cinquecento’s brilliance. They use the acoustic to good effect, managing a fine balance and resonance, driving the pace of the masses when needed to reveal Regnart’s contrasting rhythmic lines.

Both the masses derive their musical material from venerable German Easter hymn tunes rather than from recent polyphonic models as was typical by the late 16th century. Regnart died in Prague in 1599, before any of the Masses he had brought with him from Innsbruck could be typeset. However, his widow oversaw the printing of no fewer than three volumes of his Mass settings.

Fastidious attention to the music and the beauty of the music confirms Cinquecento's performance credentials as one of the finest groups of its type.
Also by Andrew Palmer...
Weekend Feature: Disrupting Our Thinking About AgeHead First Alastair Santhouse Chats To Andrew Palmer About A Psychiatrist’s Stories Of Mind And BodyClassical CD Review: The Classical Piano Concerto Georg BendaSaturday Essay: An Interview With Chris Wright Partner And Head Of Inflexion’s Manchester OfficeHandel Amadigi English Touring Opera