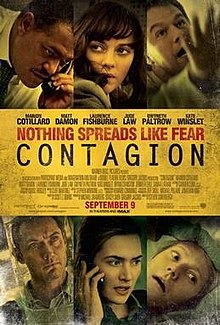 Whilst weathering the storm of COVID-19, in all its infinite layers of difficulty, the prospect of immersing oneself in similarly-themed media may seem a paradoxical if not masochistic proposition. Well, that’s about as meta as it gets! Yet in a period which has simultaneously seen sales of Albert Camus’ The Plague skyrocket, and Steven Soderbergh’s 2011 film Contagion enjoy a spike in downloads, you have to wonder why it is we’re doing this to ourselves.

The Plague (for those of you who found The Outsider a little too uplifting) opens markedly with scenes of rats dying in hordes, in scenes reminiscent of the Black Death, and brings home the true horror of such a disease. Contagion, on the other hand, may as well be the blueprint for our developing pandemic, touching in advance on now familiar terms such as contact-tracing and social-distancing, as well as advising on the necessary ablutions we should now be undertaking. Mercifully though, we’ve drawn the line at raiding pharmacies!

So why are we doing this? For many of us experiencing lock-down, this is a period of uncertainty and a threat not many of us will have encountered before in our lifetimes. Undergoing a long period of state-prescribed incarceration, with all its associated detriments, may seem an anathema for some, despite it being for our collective well-being. Possibly, we may therefore be seeking a point of reference in turning to works of fiction or home cinema. 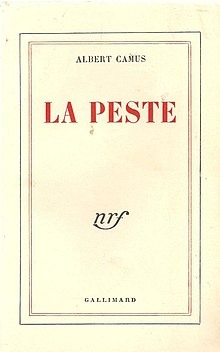 The Plague (La Peste) First Edition cover
Edmund Burke noted that the theatre of fiction could be no substitute for the theatre of fact as, “we can perceive it is imitation”. Burke gives an example of an audience watching a stage play, where the attendees, upon hearing word of a public hanging in the street, abandon the theatre, effectively championing the real-life drama over the acted. Strangely, we are now seeing this principle in reverse, with people turning to apocalyptic fictions and tales of dystopian futures, whilst our own real-life drama unfolds in real-time.

I, too, have been guilty of this, having indulged in many such works during the lock-down period. Beginning with Survivors, a 1975 BBC TV series, I got off to a pretty rough start! The series charts the progress of a number of “survivors” in the wake of a deadly plague pandemic. Whereas Contagion, to all intents and purposes, is still a blockbuster with all the trimmings, Survivors, being a low-budget British production, feels a little closer to home, and consequently is all the more harrowing. All the series required was a sinister voice-over, courtesy of Donald Pleasance! Episode one alone brought home to me just how incapable I would be if expected to fend for myself in the event of a plague-induced societal breakdown: “A book will tell you how electricity is generated, but could you do it?” In my case, no. Not until I can run my household off the power of dry wit! Certainly I’d never make a modern-day Robinson Crusoe or Jack-of-all-trades, a sentiment echoed precisely by the protagonist of John Wyndham’s apocalypse classic, The Day of the Triffids: “I knew practically nothing … of such ordinary things as how my food reached me, where the fresh water came from … [Life] had become a complexity of specialists, all attending to their own jobs.” 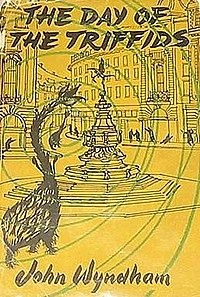 For me, each day has been a Sisyphean drag, and yet the pages of my diary have whipped by like confetti in a wind tunnel. Time really is relative – thank you, Albert! Each morning should, in theory, present a fresh window of opportunity. Yet time, with the slow yet rapid ticking of the clock, homogenises into a succession of languid afternoons, with a vow to do better on the morrow. Days are spent drawing-up optimistic to-do lists, without actually achieving anything on them. Even firing up the DVD player can feel like a Herculean challenge. Small wonder then that Groundhog Day made it onto my watch list, as well as its lesser-known sibling 12:01. A very apt double bill for someone caught in the same routine, day after day with no change or variety.

At times, the lockdown has even felt like a form of house arrest. Only natural that I decided to watch Escape from Alcatraz as well then! One quote in particular – "The Rock affects dudes differently: it either brings out your strength or it breaks you” – was of particular note. Bearing this in mind, I’ve since resolved not to let this indefinite period of personal jail-time break me in turn. Instead, I’ve tried to see what it can do for me in terms of self-improvement. If nothing else, I’ve caught up on my reading!

Also by James Goodall...
A Greater Obedience To Authority: From Richard Condon To Stanley Milgram'Numbers Rule The Universe': Q By Christina DalcherAn Interview With Heather Child: Author Of Everything About You And The Undoing Of Arlo Knott'No Regrets': The Undoing of Arlo Knott by Heather ChildDeja View (Part Two): Conflicting Realities In Heather Child’s Everything About You
I began by asking why it is, in a time of pandemic, that we have been self-referentially reading works of fiction and watching films along the theme of apocalypse. It’s rather like the time I watched In Bruges whilst actually holidaying in Bruges!

As aforementioned, it may be our propensity to seek a point of reference when plunged into a circumstance outside of our usual comfort zone. But not only this, reading books and watching films along this theme is almost like observing a clinical trial, and a successful one at that. Seeing others experiencing the same issues as ourselves, and grappling with them in a proactive way, suggests there is hope for us all. Though initially distressing, the experience can ultimately be comforting. No matter how desperate their respective situations become, our fictional heroes generally tend to come through. In Contagion, a breakthrough vaccine is discovered; in Survivors, society begins to rebuild itself; even in The Plague, where hope is in relatively short supply, the plague gradually declines and the gates of the city are re-opened. In the end, there is still hope.