Break For The Border - The Scottish Borders

Scott's view
When travelling to Scotland people tend to pass through the Scottish Borders on route to other destinations such as Edinburgh, the Trossachs and even further afield the Highlands.

However, the Scottish Borders offer a wealth of opportunities for sightseeing for that leisurely break. The rolling Lauderdale Hills entice and draw you in as do the market towns of Hawick, Kelso and Peebles and what is noticeable is the different architecture and the soft Scottish border accent, not as strong as those further north.

Among the Scottish border towns I have my favourites. Moffat, just over the border, reminds me of the type of rural French village one would stumble across whilst meandering through Brittany, the plane trees and pavement cafes give the town a distinctively continental feel.

The powerful-looking bronze ram sculpture and drinking fountain were commissioned in 1875 by a local businessman William Colvin as a gift to his native town to commemorate its long association with sheep farming and the wool trade. The otherwise perfect ram has something missing though - he has no ears!


Kelso
Further north is the appealing town of Kelso. The cobbled square and radiating streets again make you feel you could be in a rural French town.

Kelso Abbey was founded in the 1100s and was one of Scotland’s largest and wealthiest religious houses. The abbey was founded by monks invited by King David I. Originally settling at Selkirk, the monks relocated to Kelso in 1128, moving close to David’s new castle at Roxburgh. Next to nothing remains of the once-sprawling monastery precinct. But what survives of the church is one of the most spectacular architectural achievements in medieval Scotland.

Kelso is also home to Floors Castle - the largest inhabited house in Scotland. As you drive down the long drive you cannot fail to be impressed. Not all the rooms are open to the public, though the guided tour introduces you to the paintings on display, the tapestries and furniture. I usually find some of these tours a little dry but our guide gave a witty yet informative commentary.


Floors Castle
Floors Castle gardens
The Walled Garden is a short half mile stroll through the woodland. The garden and its glasshouses supply the castle kitchens with fruit and vegetables. Adjacent is the Millennium Garden - a parterre laid out in the formal French style. In one corner stands the Queen’s Summerhouse, where Queen Victoria took tea in 1867. 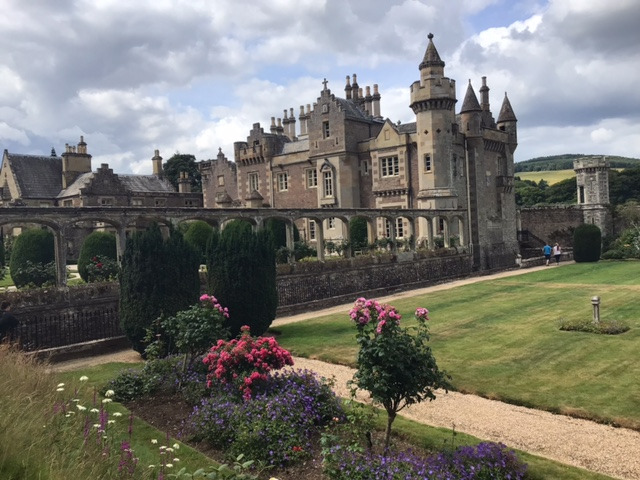 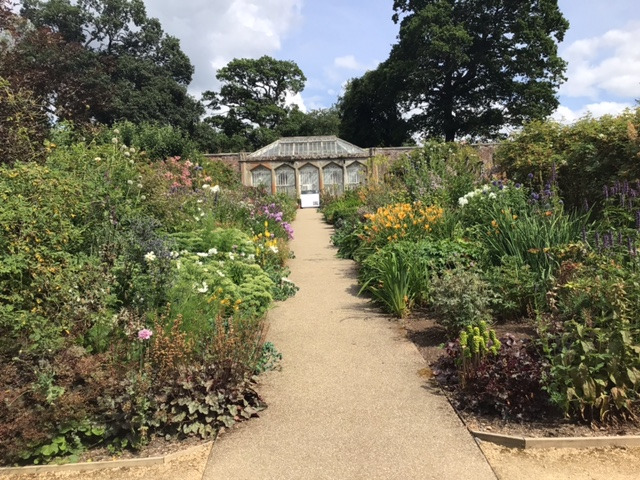 Orangery and Walled Garden
Abbotsford- the home of Sir Walter Scott is a short drive away. I enjoyed Abbotsford as it is much smaller than Floors Castle and felt more homely. Only the downstairs rooms are open to the public. I was fascinated with the study where a small staircase leads down from Sir Walter Scott’s bedroom - he used to get out of bed and come straight down to his study to start writing.

There is a walled garden too - whereas most walled gardens are built on the flat, here the garden has been constructed on a slope - an unusual feature. Standing on the banks of the River Tweed, Abbotsford is a haven of tranquility.

If you there is time, it is worth driving to Scott’s View to admire the stunning vista of the River Tweed and Eildon Hills. The hills serve as a reminder of the volcanic activity that once took place in the area. The lookout was known to be one of Sir Walter Scott's favourite places to come and reflect. 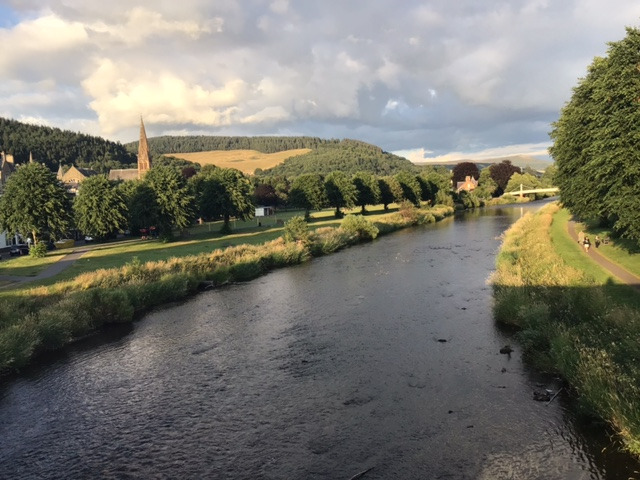 Peebles on the River Dee
Peebles High Street
A good base for the area is Peebles, the River Tweed is never far away in this region: riverside walks lead to the Main Street which contains a range of independent shops. An upmarket feel prevails, with Edinburgh only a 30 minute drive away.

The Park Hotel in Peebles has recently been modernised. Think comfy beds, upmarket chic, friendly service along with the south facing rooms that afford stunning hillside views that are a joy to wake up to after a busy day sightseeing in the area.

Guests can use the leisure facilities at the nearby Hydro Hotel. 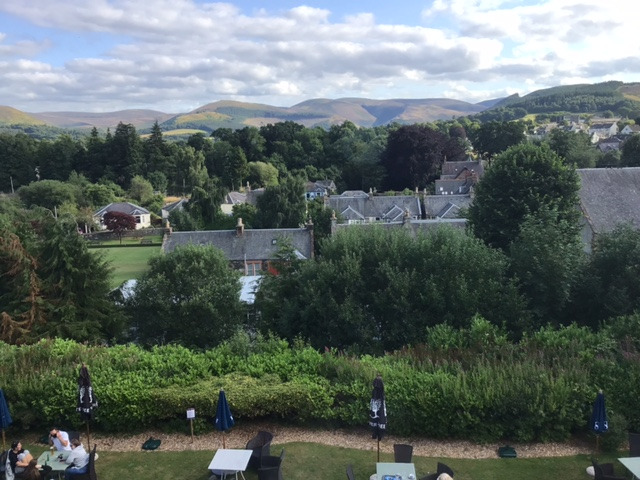 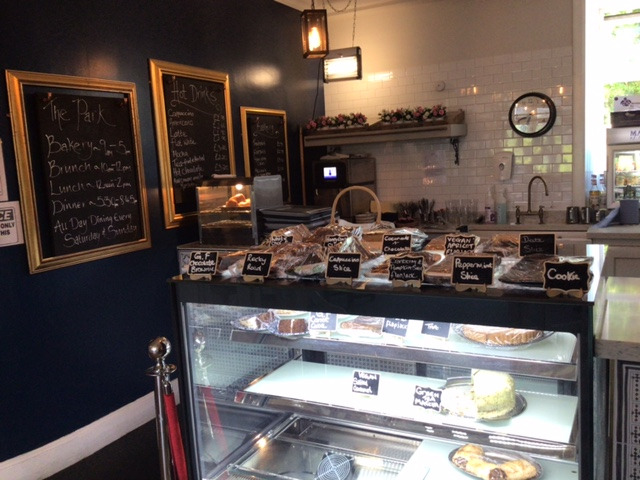 Bakery
The restaurant serves cooked homemade food (the Sunday lunch was most welcome after the drive from Yorkshire) which also can be eaten on the outside terraces if the weather is kind. The full Scottish breakfast will set you up for the day and yes they do serve Haggis at breakfast if you so desire!

For a short break destination the Scottish Borders might have been overlooked for too long - it is one of those areas that has so much to discover that it really is bordering on the brilliant.
Also by Graham Clark...
Sam Fender – On Fire In LeedsTime To Experience The One O’clock Gun Pub In LiverpoolTales From The Script As Ed Sheeran And Supporting Cast ShineAlbum Review: The Darkness: Return Back To The Limelight With New Album MotorheartAlbum Review: Dreamboats & Petticoats - Bringing On Back The Good Times