The 55th American football end of season Super Bowl game took place yesterday between the Kansas City Chiefs and the Tampa Bay Buccaneers and it was the Bucs who against the odds emerged very much on top after a superb performance. It is a million miles away from my usual sporting environment of Formula 1 motor racing, but I have to admit to having been something of a fan ever since my university days. My wife and I have since loved attending games during some of our US road trips, soaking up the glitz, passion and glamour as well as the sporting contests themselves in a family orientated non-hostile environment. 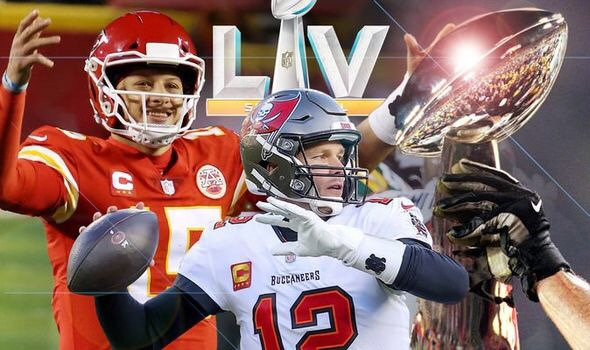 Outstanding quarterbacks Patrick Mahomes (left) and Tom Brady starred in the 55th Super Bowl
﻿The great news for followers of the sport here in the UK was that the Super Bowl game was shown live on both BBC and Sky Sports, but the bad news was that it didn’t start until 23.30GMT, which meant that it didn’t reach its conclusion until well into the early hours of this morning. As such, it was always going to be a test of commitment and stamina when sleep would normally have been very much beckoning.

The event, one of the biggest on the US sporting calendar, was held this year at the Raymond James Stadium in Tampa, Florida, which by pure co-incidence is the home of the Buccaneers. They were led by their star new quarterback, Tom Brady, who had arrived for the season just ended as a free agent after an outstanding 20 year career with the New England Patriots. In a game which features detailed tactical play as well as a need for athleticism, speed and strength, it’s amazing that 43 year old Brady is still playing, let alone so effectively. Yesterday was his tenth Super Bowl game as he sought to add a seventh victory to his lengthy CV. 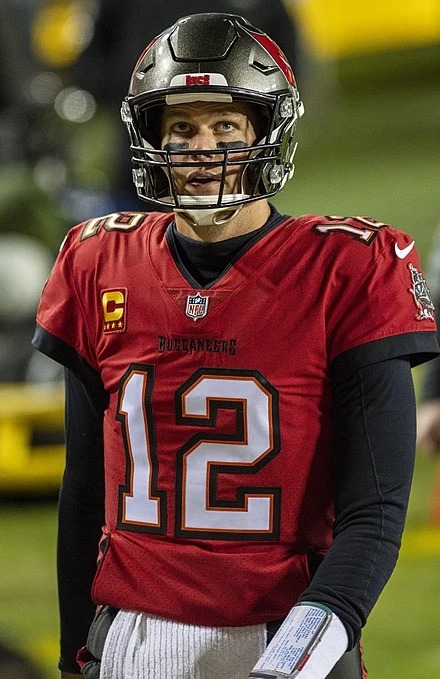 The legendary 43 year old Brady defied his age to lead the Bucs to victory
Before Brady’s arrival the Buccaneers had been one of the least successful teams in recent years, but under his influence they found themselves back in the Super Bowl for first time in 18 years. Before the play-off games leading to the Super Bowl Brady had already thrown a club record 40 touchdown passes during the regular season and, despite his advancing years, he is hoping for even better things with the club next season. Meanwhile, over in the Kansas City Chiefs camp they were confident that their own highly gifted quarterback, the relatively youthful 25 year old Patrick Mahomes, would again inspire them to victory, just as he had in last year’s Super Bowl. Kansas City is actually in the state of Missouri rather than nearby Kansas and there was snow on the ground as the Chiefs squad boarded their plane to fly south to Florida, but the weather was set to be a pleasant 20C for Sunday evening’s big game.

The US national anthem always rings out during the build-up to kick-off and this time it was delivered by country music performer Eric Church and R&B singer Jazmine Sullivan. On the subject of music, the Super Bowl half time shows have often been legendary, including contributions in previous years from the likes of Jennifer Lopez, Shakira, Prince, U2, Justin Timberlake and Bruce Soringsteen. A veritable who’s who of A list performers and of course there was that unforgettably revealing 2004 appearance by Janet Jackson alongside a younger Timberlake! This year the honour went to The Weeknd, whom I had assumed would be a group until I discovered it is actually a 30 year old Canadian singer, songwriter and record producer called Abel Makkonen Tesfaye. 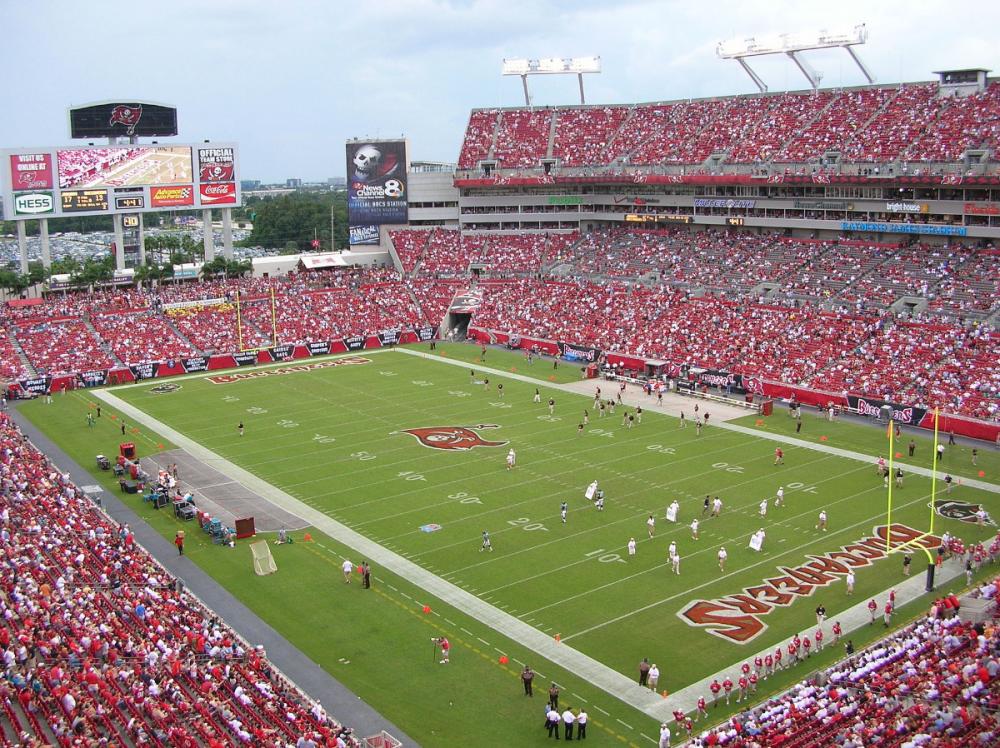 The Raymond James Stadium in Tampa, Florida - the home of this year’s Super Bowl
At the end of the opening quarter it ended up 7-3 in favour of the Bucs after Brady had thrown a late touchdown pass to his old Patriots team-mate Rob Gronkowski. As the second quarter progressed it was the Brady/Gronkowski show again as a further touchdown for the Bucs followed and come half time the Tampa lead was 21-6 after more undisciplined foul play from the Chiefs and a further touchdown pass from Brady to Antonio Brown for the Bucs.

Come the third quarter Brady soon passed short to Leonard Fournette, who proceeded to run in a further touchdown, extending the Bucs lead to 28-9 and with the final quarter remaining it was 31-9. As the last 15 minute period progressed the Bucs remained in control and in the end Brady, one of the best known and most outstanding American sportsmen ever, led his new team to a 31-9 victory as he added that seventh Super Bowl victory to his amazing career statistics. 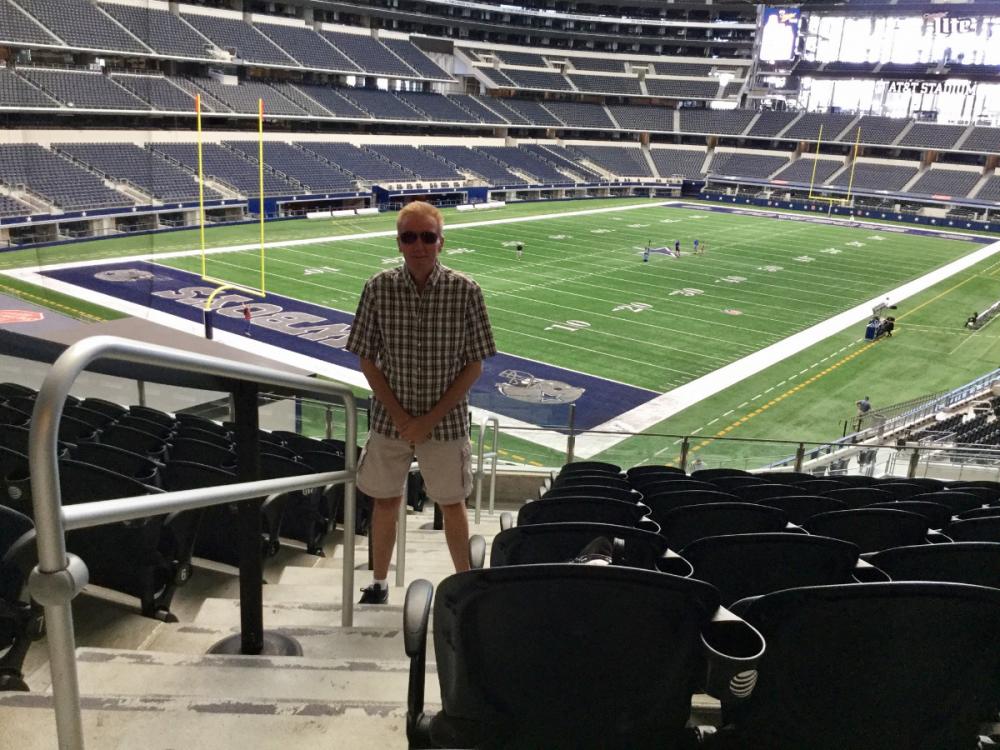 Your F1 Correspondent at the home of the Dallas Cowboys wondering why he never became a star quarterback!
Putting aside thoughts as to why I never became a star quarterback, it was 3.30am when my wife and I eventually retired to bed with snow falling heavily here in Yorkshire whilst the post game fireworks flew in Florida, but at least we felt it had again been so worth the effort. The opening Formula 1 Grand Prix of this year is set to take place in Bahrain on 28 March and at least most of the planned 23 races, if they all happen, are scheduled to start and finish at far more user friendly times.