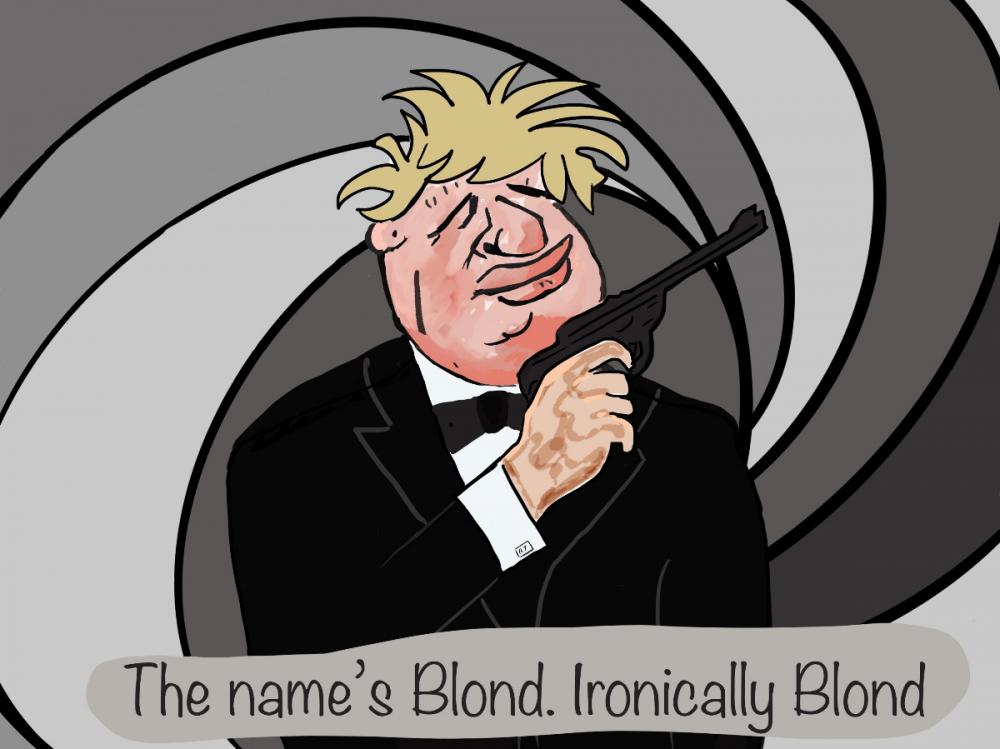 Then again, a new face to represent Johnson at Prime Minister’s Questions wouldn’t go amiss judging by his performances recently. In the last two PMQs before summer, Johnson’s pre-prepared jokes were not exactly, erm, oven-ready. In fact they were so feeble that Private Eye’s Glenda Slagg would have been too embarrassed to use them: Keir Starmer has “more briefs than Calvin Klein” – briefs – cos he’s a lawyer, geddit!??! De Pfeffel Johnson – crazy name, crazy guy! (You’re fired. Ed.)

But with Johnson badly in need of a new scriptwriter, I wonder if Phoebe Waller-Bridge is available. Just as she was brought in to freshen up the script for the forthcoming James Bond film, she could do the same for Johnson: Blond is back, in the sequel to “From Russia Vote Leave”! It’s his most predictable mission yet: “Lie Another Day”.

It’ll be a globetrotting adventure, taking in exotic locations in Greece (by way of Bulgaria) and Spain (followed by a couple of weeks self-isolating in a flat in Westminster). And with the Conservatives announcing that there will be a massive relaxation of planning laws so that you will be able to build anything anywhere, now is the time to crack on with that secret base inside a hollow volcano that you’ve always wanted. It’ll now be covered under permitted development.

It’s rumoured that in the new Bond film, he finds that he has unexpectedly fathered a child, which is a plot device I’m sure Johnson could empathise with. Bond’s boss at MI-6 is always known by the single initial “M”. In reality, the head of the organisation is known as “C”, which will at least be appropriate for Johnson’s boss: Cummings; though I’m sure the initial could happily double up for something else too.

The leader of the opposition could take on the role of Blond’s nemesis, Goldstarmer. It might focus Johnson’s mind slightly more during Prime Minister’s Questions if there was a powerful laser edging towards his spreadeagled form, but otherwise I don’t think PMQs would change much from recent outings: “Do you expect me to talk?” says Boris. “No, Mr Johnson, I expect you to lie!”

Like Le Chiffre’s blood-weeping eye in Casino Royale, Johnson has a “tell” that indicates when he is bluffing or otherwise being untruthful: it’s whenever he opens his mouth and speaks.


Also by Roger Winterbottom...
Blue Öyster Cult - The Symbol Remains (Frontiers Music)In Search Of The NorthDon't Dream It's DoverReview: Runaway's River By Kevin WoodThe Algorithm Method
Taking on the role of a henchman could be Matt Hancock, though I admit “hench” may be overstating it somewhat for Matt. I suspect, rather than Oddjob, he’ll be Nojob in a little while, once Johnson stirs himself to apportion blame for the Coronavirus response. Hancock’s latest action was to impose new lockdown restrictions across half of northern England last week, with little more than two hours’ notice. He did the rounds of the media the following morning to explain the new rules. Speaking to Sky News, he said, “It’s absolutely crystal clear what the measure is.” Excellent. That makes a change from the usual “clear” and “very clear” messages that we’re then told we’ve misunderstood. “Which is that you shouldn’t socialise with people in other households,” he continued. Yes, that actually is clear for once. Nice and simple. “Except in public outdoor places,” he added. Hang on – what was that? No socialising, except in public. Right. I’m…err…well, please go on. “So not in your own home or garden.” Okay…maybe someone else’s garden? “You can go to the pub, but with members of your own household,” he continued, “and that applies to other areas of hospitality as well.” Got it. No socialising, except in public, but not in the pub, unless you’ve gone there separately. “The rules are absolutely crystal clear,” Hancock reiterated. Yes, they are, Matt. Yes, they are.

Hancock was later asked on BBC Breakfast, “Can a household from Greater Manchester meet a household outside of the region?”

“Two households cannot meet in the affected area,” he replied. Now, that’s more like it again. Very straightforward. “Two households can meet up outside the area,” Hancock then added. Oh. Is the virus unable to cross the borders of Greater Manchester? Anyway, I’ve got it now: if you want to see your granny, you both simply need to drive out of the county and then it’s all fine. Or if your granny just happens to sit at the next table in your local pub, that’s okay too. Crystal clear.

The government put out a statement saying that “the spread is largely due to households meeting and not abiding to social distancing”. Of course it is. It’s nothing to do with the government telling us all to go back to work, to bring some “bustle” back to the high streets, and to get back to the pubs and restaurants; and it’s certainly nothing to do with inconsistent rules that people no longer understand. “We can see increasing rates of Covid across Europe and are determined to do whatever is necessary,” the statement went on. The number of deaths from Covid in Spain in the previous five days had been 12; in the UK, 426.

Meanwhile, as part of the Conservatives’ commitment to reduce the number of people in the House of Lords, Boris Johnson has, erm, added 36 new ones. Philip Hammond, the ex-Chancellor was one of those offered the opportunity to join the ranks of those in vermin. Sorry, ermine. Just last year, Hammond declared that “the Conservative Party has been taken over by unelected advisors, entryists and usurpers who are trying to turn it into an extreme right-wing faction. Sadly, it is not the party I joined.” Well said, Phil! A man of principles and integrity! There’s no way he’ll accept the offer of a peerage! “Honoured to join the House of Lords and delighted to be rejoining the Conservative Party.” Oh. That didn’t last long.

Other new peers include Ian Botham, elevated to the Lords because…erm…well, who knows? I’m sure he must have done something useful recently besides posting pictures of his semi-tumescent genitalia on Twitter. Also made a Lord was Boris Johnson’s brother, Jo. Honestly, they just don’t care anymore, do they? Why not go the full Caligula and ennoble Dilyn the Downing Street dog? Jo Johnson had previously resigned from government, citing “unresolvable tension” between family loyalty and the national interest. I guess he’s found a way to resolve it after all.

But despite the cronyism, despite the failure to manage Covid, despite the general cack-handed incompetence, the Conservatives are still polling ahead of the Labour Party. Then again, people saw Boris Johnson hiding in a fridge during the general election and thought, “Yes! That’s the kind of person we need running the country!” It always seemed when I was at university that many of the women there wanted to be rogered by an old Etonian. I hadn’t realised half the country also wanted to be screwed by one. Well, we’re certainly getting the chance now; and I’m struggling to find a quantum of solace in that.