It has been a vintage year for fans of Blue Öyster Cult. The band, best known for their 70s hit (Don’t Fear) The Reaper, have released four albums and DVDs/Blu Rays of live material recorded in recent years, including a wonderful 45th anniversary concert of their ground-breaking first album. Former member Joe Bouchard has recently released a very strong new album, Strange Legends, while his brother Albert Bouchard is about to release his reimagined version of BÖC’s incomparable 1988 album, Imaginos, appropriately titled ReImaginos. The real gem, though, is The Symbol Remains, BÖC’s first new studio album in nineteen years. 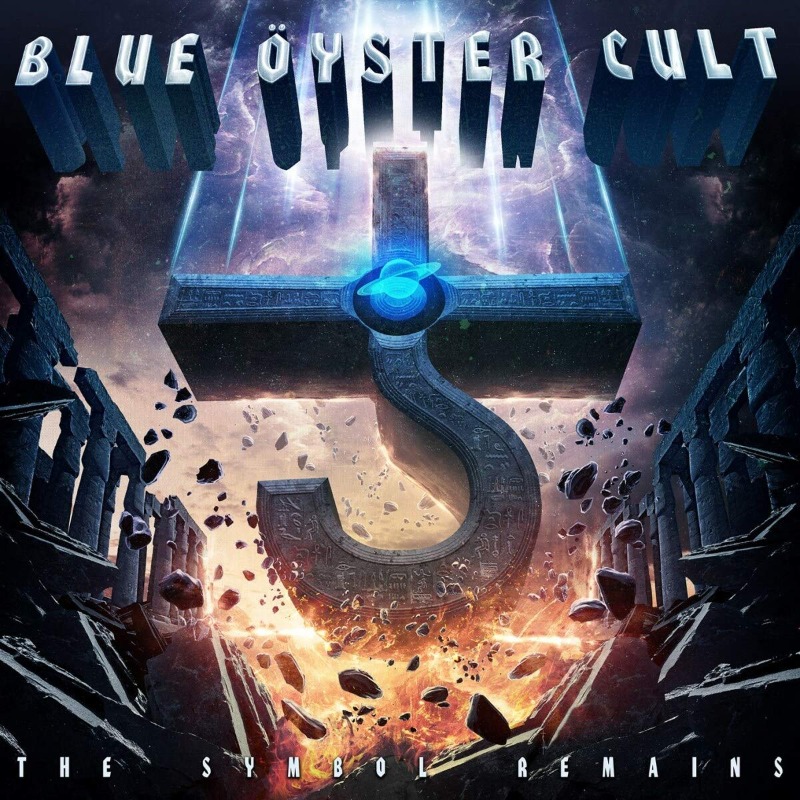 Taking its title from a lyric from 1983’s Shadow of California and referencing the mystic sign that symbolises the band, The Symbol Remains is a triumphant return for the veteran rockers. The band’s line-up comprises two survivors of the original band, frontman Eric Bloom and virtuoso guitarist Donald “Buck Dharma” Roeser, augmented by long-term members Richie Castellano, Danny Miranda and Jules Radino. Although Bloom and Roeser are now in their 70s, their enthusiasm is undimmed and the band still regularly plays over one hundred gigs a year, even playing drive-in concerts during the pandemic. Strangely, their popularity seems only to have increased over the last two decades without any new material, perhaps best explained by their position as elder statesmen of the genre, in combination with their still fearsome live reputation.

Miranda, on bass, and Radino (drums) provide a solid, powerful backline to the music, while Roeser and Castellano share guitar duties as well as taking lead vocals on numerous songs. Although Bloom sings fewer numbers than he used to - his age has led to his range being more restricted - he produces a series of marvellous performances on the harder songs. Roeser, meanwhile, is one of the most talented yet underrated rock guitarists in the genre, and he demonstrates his abilities throughout the record. Castellano is a revelation and clearly a major driving force in bringing the album to fruition, playing multiple instruments as well as performing production and engineering roles.

The album’s opener and first single, That Was Me, is a statement of intent from the band, with a hard-hitting riff and Bloom deploying his trademark sardonic, menacing singing style. With fantasy and sci-fi writer John Shirley providing the lyrics, as he does for several other songs on the record, the song picks up where BÖC’s previous two albums left off, with some crunching hard rock.

Box In My Head demonstrates another side to BÖC’s music, the melodic, more power pop-oriented style of Roeser’s compositions. Again, the style is familiar from the previous two albums and would also not have been out of place from his 1982 solo album. Tainted Blood, co-written by Bloom and Castellano, begins to demonstrate the diversity that will be displayed throughout the rest of the record. A few BÖC songs have had a vampire theme (Nosferatu, I Love The Night), and this new tune sees one vampire mourning the death of another, his lover for two hundred years, her life ended by the tainted blood of the title. Heartbroken, he no longer wishes to live forever without her:

Put a stake through my heart, throw me out in the light,
Do whatever it takes to end this endless night

The song has a very 80s feel to it, with a big, catchy chorus that would feel quite at home on a Def Leppard album.

This is followed up by Nightmare Epiphany, a tune that appeared previously in a limited release of Roeser’s demo songs (the Buck Dharma Archives). It is a more polished version than that previous incarnation, and it drives forward with an insistent rhythm, some fine guitar solo work and distinctly nightmarish lyrics from Shirley: 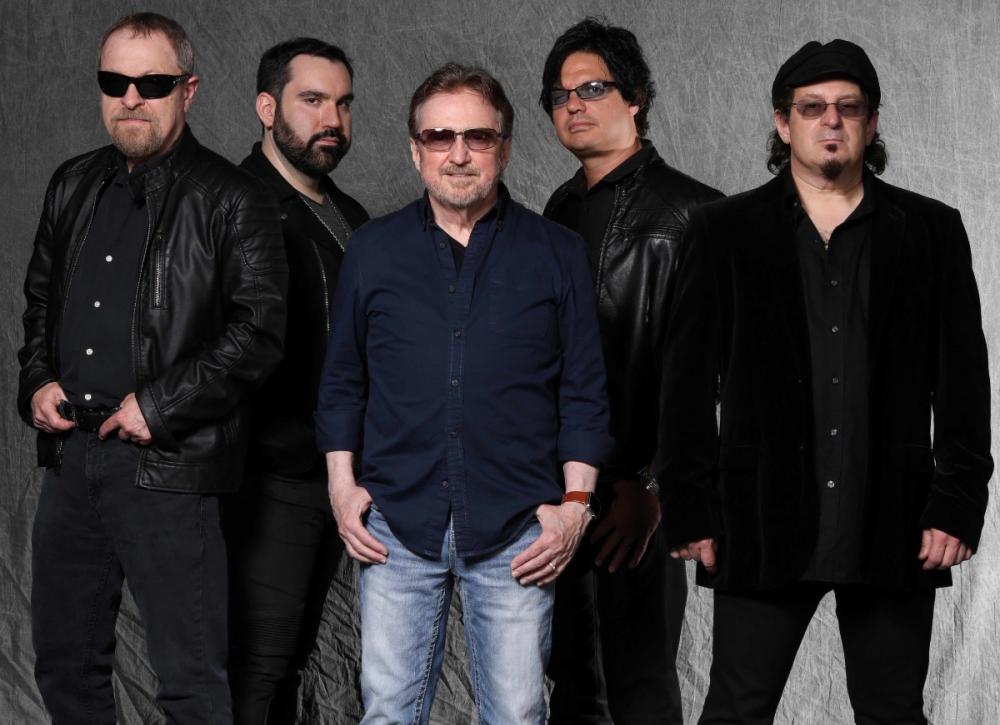 Edge Of The World is a more moody affair, returning to another familiar theme of various BÖC songs, alien visitations, with a nod to the X-Files in the lyrics: “I want to believe.” It’s a fine solid, rocker, with Bloom conveying a world-weary cynicism in the verses before it breaks into a smooth, catchy chorus. The Machine, written and sung by Castellano, is an amusing ode to the mobile phone, with its lyrics subverting more traditional love songs, while the chorus is another that will have you quickly hooked.

Train True (Lenny’s Song) is an up-tempo rockabilly boogie shuffle and is unlike anything BOC have ever produced before. It’s a fun tune with humorous lyrics and shows once more that the band were never ones to stick with a simple formula but always liked to branch out and experiment. The Return of St Cecilia features lyrics by one of BOC’s original wordsmiths, Richard Meltzer, and hearkens back to the early days of their career fifty years ago. It’s not as psychedelic as some of those early lyrics, without the same stream-of-consciousness feeling, but the music, by Castellano, is very cleverly reminiscent of the period, with Hammond organ in the background and a riff that could have come from their first album. It’s a very fine piece of music and one that improves with repeated listening.

Metallica are fans of the band – memorably covering Astronomy – and Stand And Fight feels as though the compliment is being returned. It’s a chugging, doom-laden heavy metal sound and is eerily reminiscent of Metallica’s Black Album. By contrast, Florida Man has a breezy, laid-back 70s sound, complete with a handclap rhythm, with lyrics that aim to provide an origin myth for the internet meme of the titular figure, suggesting a Seminole medicine man cursed the descendants of the conquistadors. From one curse to another, and The Alchemist is based on an HP Lovecraft story wherein a line of princes and kings is cursed by the alchemist after his father is murdered. The song is huge, a brilliant epic reminiscent of Frankenstein from their Imaginos album, with Bloom sounding superbly threatening and evil. There is some lovely piano work throughout and the middle of the song features a double-time twin-guitar breakout from Roeser and Castellano, the pair of them exchanging wonderful call-and-answer solo licks before settling into a harmonised attack in the style of Iron Maiden. It’s a thrilling piece of work and it’s only a shame that it doesn’t continue for longer: I can well imagine that in the live environment it will do so.

Secret Road is another resurrected offcut from Roeser’s Buck Dharma Archives, again benefitting from being worked up into full production. It’s a grower that rewards repeated listening and features some fine melodic guitarwork. It’s followed by the sleazier There’s A Crime, which is a rocker reminiscent of Van Halen in their Fair Warning period. The album rounds off with the sublime Fight, with its humorous lyrics in which nothing very much happens:

With a shimmering, jangly guitar sound and a looping riff that faintly echoes Rush’s The Spirit of Radio, it’s a catchy earworm of a tune that encapsulates BOC’s clever, subtle side. The final line - “Last one turn out the light” – might suggest this could be the last studio work from the band. Let us hope not. Blue Öyster Cult have crafted an exceptionally good record, with a diversity of styles that still creates a cohesive whole. For a band whose two senior - and lead - members are in their 70s, it’s quite brilliant. Superbly executed, the album shows a band still at the top of their game after five decades. The Symbol Remains could well be the rock album of the year: thoroughly recommended.


Also by Roger Winterbottom...
The Lockdown ThreequelReview: Troubled Blood By Robert GalbraithSo Long, And Thanks For All The FishYou Can't Beat A Bit Of BullyI'm A Nonentity - Get Me Out Of Here!