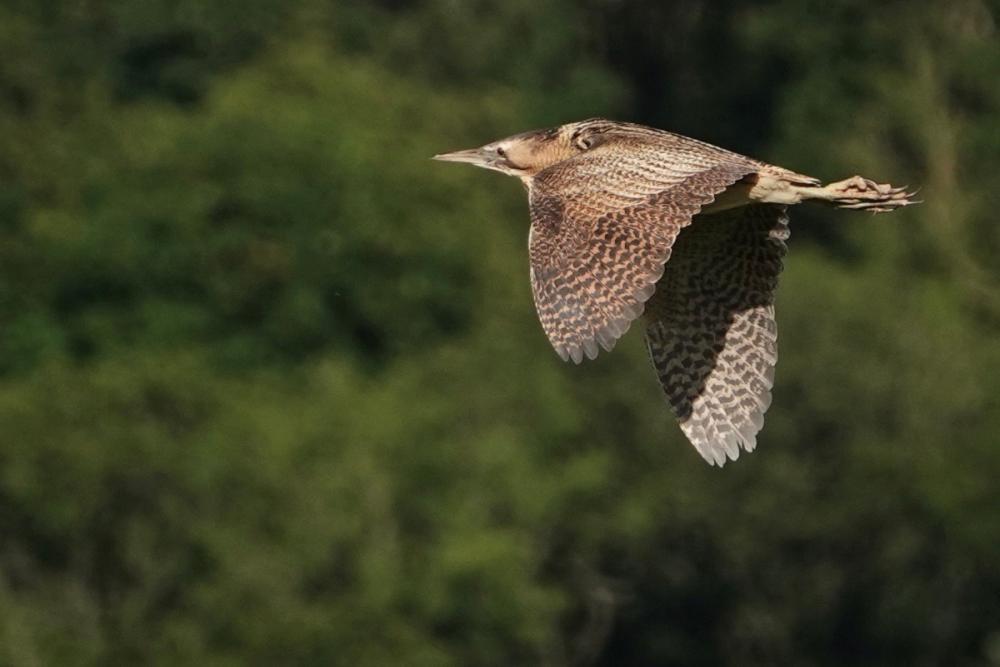 Bittern in flight at RSPB Leighton Moss; Credit: Jarrod Sneyd
Visitors to RSPB Leighton Moss in Silverdale, Lancashire, have been treated to a rare nature spectacle in recent weeks thanks to a turnaround in the fortunes of the reserve’s bittern population.

With feeding activity at its peak, the usually secretive, heron-like birds have regularly been seen flying over the nature reserve as they work to keep their young fed with fish, amphibians and insects.

RSPB Leighton Moss had six resident male bitterns this spring and there are now at least four active nests across the reserve. The numbers represent a remarkable recovery for a species that was at the brink of extinction in 1997, with just 11 males left in the whole of the UK.


Jarrod Sneyd, Senior Site Manager at RSPB Leighton Moss, said:
“The reserve has been absolutely buzzing with talk of bitterns. Visitors are really excited about getting the opportunity to see these magnificent birds. In recent weeks, while looking out from Causeway Hide or standing on top of our Skytower observation point, there has rarely been a day when I haven’t seen a bittern in flight.”

Bitterns nest in reedbeds and males are known for their distinctive ‘booming’ call. The sound can sometimes carry for three or four kilometres and is a bit like the noise made by blowing across the top of a milk bottle. Booming is used by males to establish a large territory, warn off other males and attract females. It can begin as early as January and continue as late as July.

RSPB Leighton Moss has always been synonymous with bitterns but by the late 2000s they had stopped breeding at the reserve. A few years ago, one lone male bittern was heard booming at the start of the breeding season.

A programme of work by staff, volunteers and contractors to improve the site’s reedbed habitat followed, supported in part by DEFRA, EU Life, Lancashire Environmental Fund and SITA (now Suez Community Trust). Satellite sites were also established to create more reedbed – all part of making RSPB Leighton Moss bigger, better and more connected for bitterns and wildlife in the landscape.

The elusive birds returned to the reserve to nest in 2018 after an absence of almost a decade. By creating space and the right wetland habitat for bitterns, other species are also benefitting, including bearded tits, marsh harriers and otters.


Jarrod said:
“To see that recovery and get back to the stage we’re at now after so much hard work is incredibly rewarding. For someone like me, who has been fascinated in bitterns since the age of eight, I never tire of seeing this wonderful, illusive bird.

“The frequency of flights increases at this time of year because bitterns are nesting and feeding their young – that’s why we’re being treated to such amazing spectacles. Typically though, this is a very secretive bird that spends much of its time in the reeds and is very well camouflaged.

“There were 228 booming males counted in the UK last year and you have to come to somewhere special like RSPB Leighton Moss to see one. It’s still an incredibly unique experience. If you’re lucky, you might even see one on the edge of the reedbed. It’s much more difficult but certainly worth persevering.”