Better Welfare Conditions For Millions Of Farm Animals During Transit 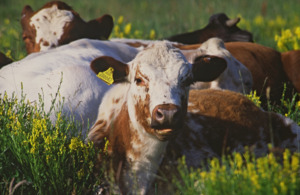 Higher welfare standards for farm animals being transported, including shorter journey times, more headroom, and stricter rules on being moved in extreme temperatures, will be brought in by the UK Government under new animal welfare measures announced today.

These new rules, which are being developed in partnership with the farming industry, will apply to animals being transported within England and Wales come alongside the introduction of a ban on live animal exports for slaughter and fattening, which is currently going through Parliament as part of the Animal Welfare (Kept Animals) Bill.

EU rules had previously prevented any changes to animal welfare rules, however as an independent nation the UK is now able to go further and build on the UK’s position as a world leader in this field through a series of reforms to improve standards, as set out in the Action Plan for Animal Welfare.


The new proposals will raise welfare standards for farm animals by:

The Government has listened to early feedback from industry and will now work with the farming sector and welfare groups to develop these proposals and prepare for the transition to the higher standards to build on the high-welfare outcomes already being delivered on farms across England and Wales.

These new conditions would apply to all journeys over 65km. Independent evidence has shown that very long journeys can cause heat stress, dehydration and physical injuries in transported animals such as horses, pigs, sheep, poultry and cattle. Over a billion animals are farmed in the UK each year, many of which are transported within the country for slaughter, fattening and breeding.

Announcing the new standards, Environment Secretary George Eustice said:
"We are legislating to ban the export of live animals for slaughter and fattening, and are now developing other measures to improve the welfare of animals during transport.

"We have listened to the concerns raised relating to our proposed changes to transport regulations and have made changes to address these. We will continue to work with industry on the remaining details."

RSPCA Chief Executive Chris Sherwood said:
"We are absolutely thrilled that the live export of animals is finally coming to an end after campaigning on this issue for more than 50 years.

"This is a victory for every single person who has signed a petition, demonstrated at the docks, written to their MPs and leaders and most importantly for the animals.

"We also welcome tighter controls over transporting live animals within Great Britain as it’s a time when they can suffer stress and injury and their welfare needs to be protected."

Phil Stocker, Chief Executive of the National Sheep Association, said:
"The National Sheep Association (NSA) is supportive of working with Government to find solutions to the transport of animals and adapt to changing supply chains over the years, so is pleased to have received the invitation to collaborate on developing these proposals. The Association always welcomes any opportunity to work with Defra on the subject."

James Given, Director of Equine Health and Welfare at the British Horseracing Authority, said:
"The British thoroughbred industry shares the government’s ambition to protect animal welfare whilst in transport through practical solutions based on clear evidence. We welcome the government’s commitment to work together to co-design solutions that will enhance the high standards of welfare already in place in the industry."


In addition, the consultation highlighted a number of other measures that could help improve animal welfare during transport, including better training for animal transporters and new guidance on an animal’s fitness to travel. Work will be undertaken on all of these areas to develop more detailed proposals and a new method for calculating space allowances for farm animals during transport.

The announcement follows a twelve-week consultation launched in December, which sought industry and public views on proposals to improve animal welfare in transport.