Not only will Aston Martin be competing in this year’s Formula 1 world championship for the first time since 1960, but it will also be sharing the safety and medical car duties at every Grand Prix weekend with Mercedes. 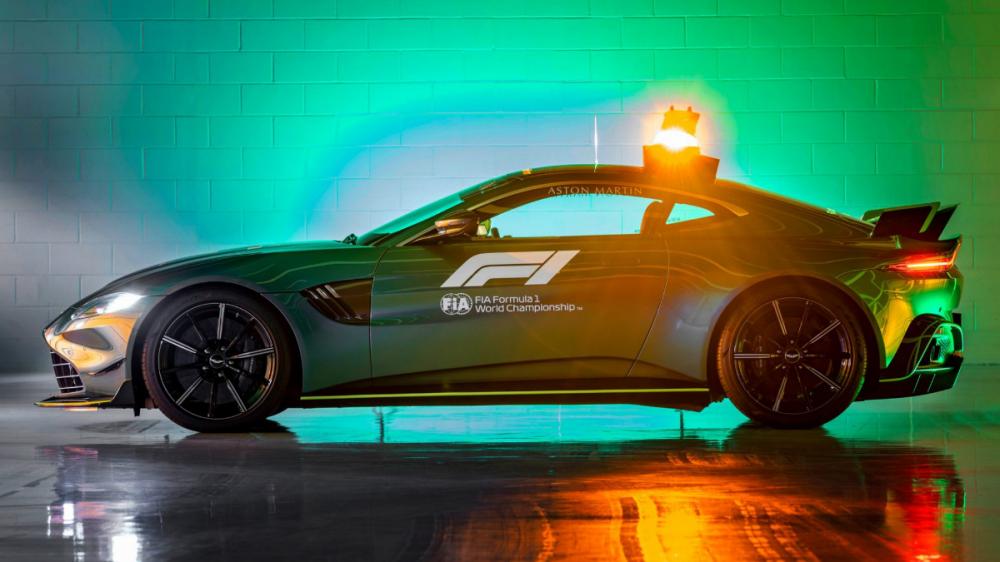 Aston Martin’s new Formula 1 Safety Car
Mercedes has supplied the official Formula 1 Safety and Medical Cars since 1996 and they have become a readily recognised sight at race circuits around the world. However, with effect from this season the German manufacturer is happy to share the cost and workload of providing these services with Aston Martin, a company with which it already has close technical ties and in which it is to increase its stake and become a 20% shareholder. 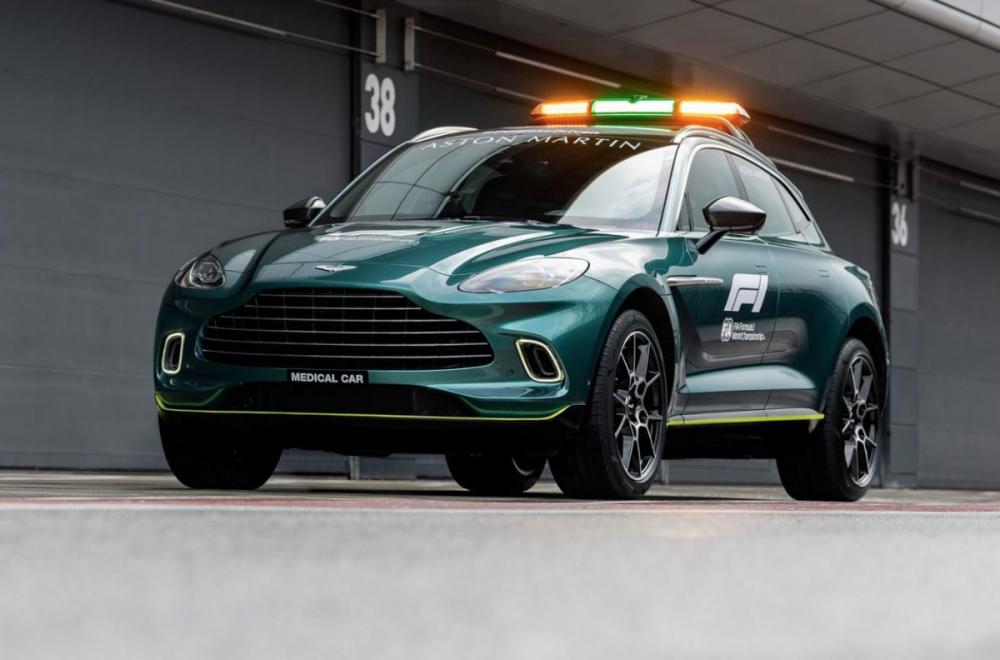 Aston’s DBX SUV in its F1 Medical Car guise
Today has marked the official revelation of the eye-catching new vehicles specially developed at Aston Martin’s Gaydon headquarters and also a striking change of colour for the Mercedes cars. The Aston Martin Safety Car is a Vantage with a four litre twin-turbo V8 engine, enabling it to sprint to 62mph in just 3.5 seconds. Additional suspension and aerodynamic improvements have also been introduced to ensure the car can safely circulate at high speed ahead of a pack of following F1 cars. The new Medical Car utilises Aston Martin’s first SUV, the DBX, and it has the same engine as the Vantage, with its 550 horsepower and 700NM of torque allowing it to sprint to 62mph in 4.5 seconds. Due to its role, the Medical Car is also fully equipped with FIA specification equipment including a defibrillator, two fire extinguishers and a burns kit. 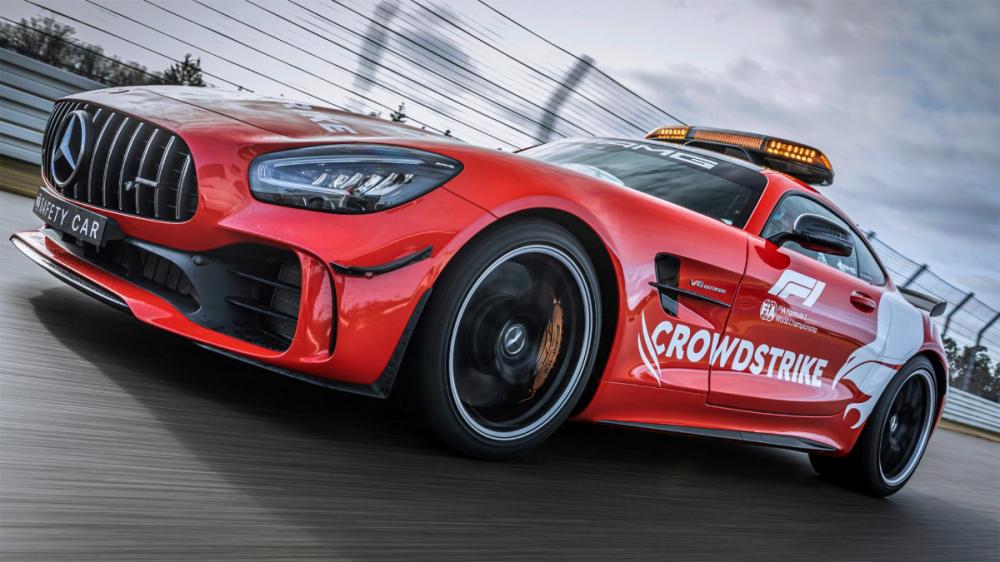 Mercedes’ AMG GT R will continue as a Safety Car, if now with red paint
Also by Graham Read...
A Return Visit To Anglesey CircuitA McLaren 1-2 In Italy As Hamilton And Verstappen Crash OutRussell To Mercedes And Bottas To Alfa RomeoVerstappen Delivers At A Very Orange Zandvoort!Verstappen Wins At A Very Wet Spa As Russell Stars
Mercedes uses an adapted version of its AMG GT R model as its Safety Car, with its own four litre biturbo V8 engine enabling it to reach 62mph in 3.6 seconds, and its Medical Car is a C 63 S Estate. The big change from the past though is that their traditionally silver colour has amended to bright red, with the Safety Car also bearing advertising for the American cybersecurity technology company CrowdStrike.

Formula 1 has long used the same two former racing drivers to pilot its emergency intervention vehicles, namely the 49 year old German Bernd Mayländer behind the wheel of the Safety Car and the 41 year old South African Alan van der Merwe in the Medical Car, the latter always being accompanied by Dr Ian Roberts, the FIA F1 medical response co-ordinator. The Medical Car follows the fast disappearing pack of Formula 1 cars ahead of it on the opening lap of every Grand Prix and then sits in the pit lane with the Safety Car, both ready to be deployed instantly if required. 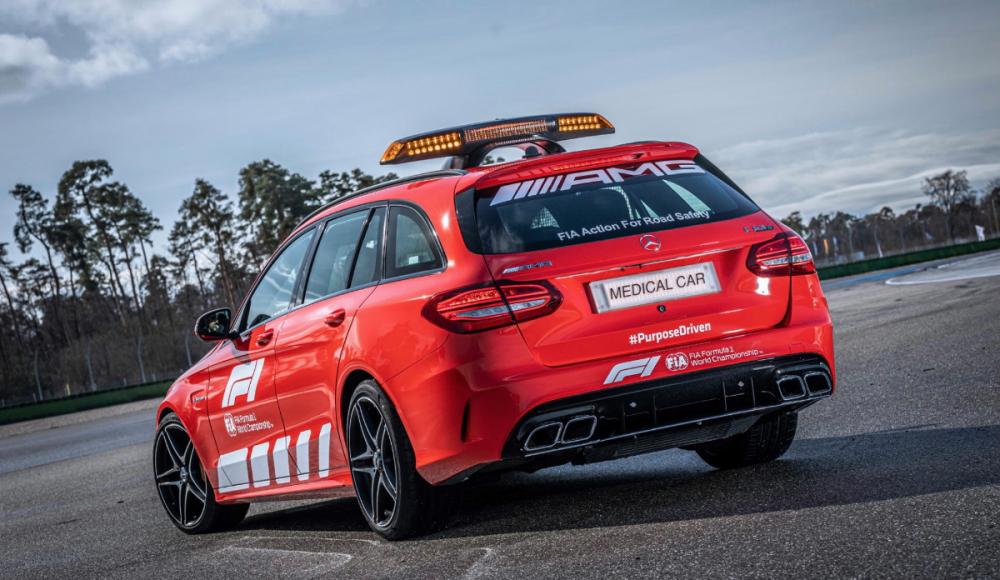 The other Medical Car will continue to be a Mercedes C 63 S Estate
It is intended that Aston Martin and Mercedes will alternate at successive Grand Prix weekends this season, with the former on duty for the opening event in Bahrain later this month.