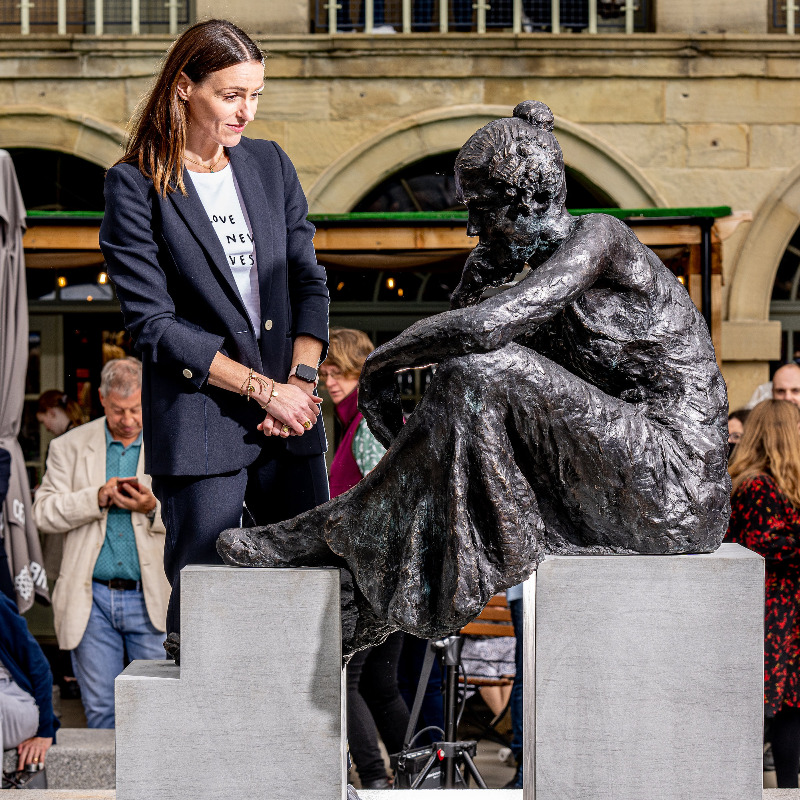 Gentleman Jack star, Suranne Jones unveils a newly-created interpretation of the remarkable person she portrays, Anne Lister, at the stunning Piece Hall in Halifax - photo credit Charlotte Graham for The Piece Hall
On 26 September, a landmark sculpture of prominent 19th century diarist, landowner, entrepreneur, scholar, traveller, and lesbian, Anne Lister, was unveiled in The Piece Hall’s 66,000 sq ft open-air piazza. The special unveiling ceremony saw Gentleman Jack star, Suranne Jones, series creator Sally Wainwright OBE and sculptor Diane Lawrenson – three women who have worked hard to bring the remarkable story of Anne Lister to life for contemporary audiences – come together to celebrate Anne’s life. The installation, called ‘Contemplation’, has been made possible thanks to the work of The Piece Hall Trust and is now on permanent display at the iconic Piece Hall.

In a ceremony, watched by hundreds of invited guests and onlookers, the sculpture was unveiled from beneath a traditional piece of cloth – as once traded at The Piece Hall - rounding off a special series of events to mark the 181st anniversary of her passing.


Anne Lister (1791-1840) often described as ‘the first modern lesbian’, had strong connections to Halifax as a successful female entrepreneur and landowner from the West Yorkshire town. She notably wrote an estimated five million words detailing her life as a landowner and businesswoman and her liaisons with other women, as well as portraying the network of relationships between women of the gentry and aristocracy in early 19th century Halifax and beyond.

Nicky Chance-Thompson DL, Chief Executive of The Piece Hall Trust, commented:
“This is a story of a woman that still holds such resonance today. It felt right that we, as The Piece Hall Trust, helped enable this remarkable new piece of art, commemorating a woman who continues to have such an impact locally, nationally, and internationally. We wanted to bring Anne’s story to life, by bringing together other extraordinary women who have given their own special interpretation of her life – Diane Lawrenson and Sally Wainwright, together with Jill Liddington and Helena Whitbread. I’m proud that The Piece Hall will pay homage in this way for visitors from around the world to visit and experience. It has been wonderful to have these remarkable women involved to celebrate Anne Lister’s remarkable and brave life.”

Gentleman Jack writer and Piece Hall Patron Sally Wainwright OBE said:
“Anne Lister is a huge inspiration. She is a source of inspiration to me and the fact that Gentleman Jack has resonated with audiences around the world has been very special for me. To be involved in the unveiling today is such a privilege and my thanks go out to Nicky, Sir Roger Marsh, and everyone at The Piece Hall Trust for enabling this; Diane for creating such a beautiful piece of art, and Suranne for helping me to tell Anne Lister’s remarkable story in such a sensitive and powerful way. It’s fantastic that we’re able to honour her legacy in such a beautiful and historical venue that would have been part of her day-to-day life here in Halifax.”

Suranne Jones added:
“What an incredible day! Anne Lister’s story is one that I have been privileged to play a part in telling and the response to Gentlemen Jack from audiences around the world has been astonishing. It’s vitally important that we continue to tell the story of strong women throughout history, whether it’s through our television screens like Gentleman Jack or works like this that will encourage people to delve deeper into her life. Halifax and Calderdale have played an important role in my own life since the first series of Gentleman Jack aired on TV, and I’m delighted that this new installation has a permanent home in such a stunning venue.”


The Piece Hall – a focal point of trade and commerce in Halifax during Lister’s lifetime, which she often referred to in her diaries - was also recently used as a filming location for scenes for the new series of Gentleman Jack, made by BBC/HBO. Visitors can now admire the sculpture, which sits on a stone plinth donated by Halifax-based stone merchants, Marshalls plc, along with other sculptures and art created by Diane Lawrenson now on view in The Piece Hall’s Gallery.

Opening hours for The Piece Hall are:

Sunday to Thursday 10am – 11pm
Friday to Saturday 10am - midnight

More details on The Piece Hall can be found at: https://www.thepiecehall.co.uk/