Lancashire Times
A Voice of the North
frontpagebusinessartscarslifestylefamilytravelsportsscitechnaturefictionwhatson
No cookies. No tracking. No advertising.
sports 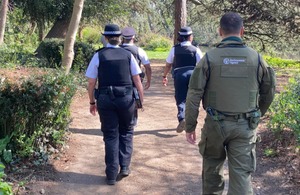 As river coarse fishing gets back into full swing, the Environment Agency is reminding anglers to make sure they have a valid fishing licence. Environment Agency Fisheries Enforcement Officers with support of the Voluntary Bailiff Service (VBS), police and other partners carried out 608 targeted close season patrols during the first 10 weeks of the close season, detecting 214 offences.

Environment Agency officers undertook 224 targeted Operation CLAMPDOWN close season patrols in May alone, resulting in the detection and reporting of 21 offences relating to non-compliance with close season and 42 other offences, mainly related to unlicensed fishing and also several illegal traps.

Operation CLAMPDOWN patrols took place across rivers, streams, drains and on specific canals and stillwaters that retain the close season.

The Environment Agency is also inviting new and seasoned anglers to see their fishing licence as more than just a legal entitlement to fish as part of a new campaign launched last month. The campaign highlights that fishing is a licence to connect with nature and see friends.

Graeme Storey, Fisheries Manager at the Environment Agency, said: "As the new season starts, we encourage everyone to give fishing a go. It’s fun, a great way to connect with nature and get away from daily pressures.

"While most people fish safely and legally, some people do break the rules. Our officers patrol all year round and suspicious activity will be challenged. By working closely with our partners on Operation Clampdown we can address these issues and minimise their impacts on the environment and on those who do the right thing."

Nino Brancato, Angling Trust National Enforcement Support Manager said: "Throughout the close season, our volunteer bailiffs have done an excellent job in patrolling waters all over the country and reporting suspicious activity to the relevant authorities. Fisheries enforcement is a great example of how partnership working works well with staff from the Angling Trust, Environment Agency, police and volunteers all committed to protecting our rivers, canals and lakes for the benefit of fish and fishing."

The close season campaign was supported by volunteers from the Voluntary Bailiff Service (VBS), whose ‘eyes and ears’ coverage on the riverbank is valuable in supporting Environment Agency Fisheries Enforcement Officers.

Environment Agency Fisheries Enforcement Officers patrol all year round. Those found guilty of unlicensed fishing by the courts face a criminal conviction and a fine of up to £2,500.

Enforcement activity is undertaken to protect fisheries, licence income and the wider environment. The Environment Agency, VBS and police are cracking down on illegal and anti-social activity which can ruin the experience for law-abiding anglers. Activity such as setting illegal traps and leaving discarded equipment at banks can also have detrimental impacts on fish stocks and local wildlife.

We urge anyone who sees suspicious activity to report it to the Environment Agency on 0800 80 70 60.


Examples of close season enforcement activity
On 15th March, members of the Environment Agency North East Area Enforcement Team, the Angling Trust Fisheries Enforcement Support Service (FESS), Canal and Rivers Trust and Cleveland Police marked the start of Operation Clampdown by a regional launch on the banks of the River Tees at Stockton on Tees. At the launch, two males were observed with fishing gear on the opposite bank and after checks were carried out it was established that both men were fishing for coarse fish during the close season which was quickly intercepted.