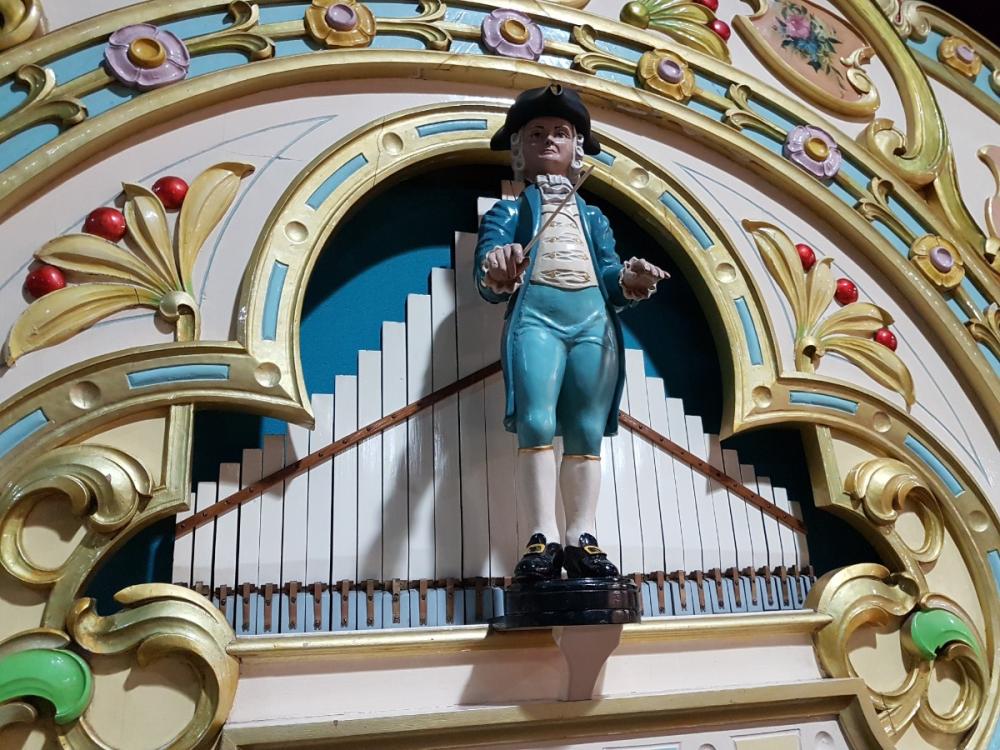 Scarborough has been keeping a secret for far too long but, worry not, the cat is out of the bag!

Just outside the town on the A165 en route to Filey, at Lebberston, you will be met by a myriad of caravan sites, but one in particular is worthy of your attention: the family-owned Flower of May Holiday Park.

That in itself is nothing extraordinary until you penetrate the expansive acreage and discover a collection of green, metal ‘barns’: prepare to be amazed by the hidden gem within. The Scarborough Fair Collection & Vintage Transport Museum is absolutely fantastic! 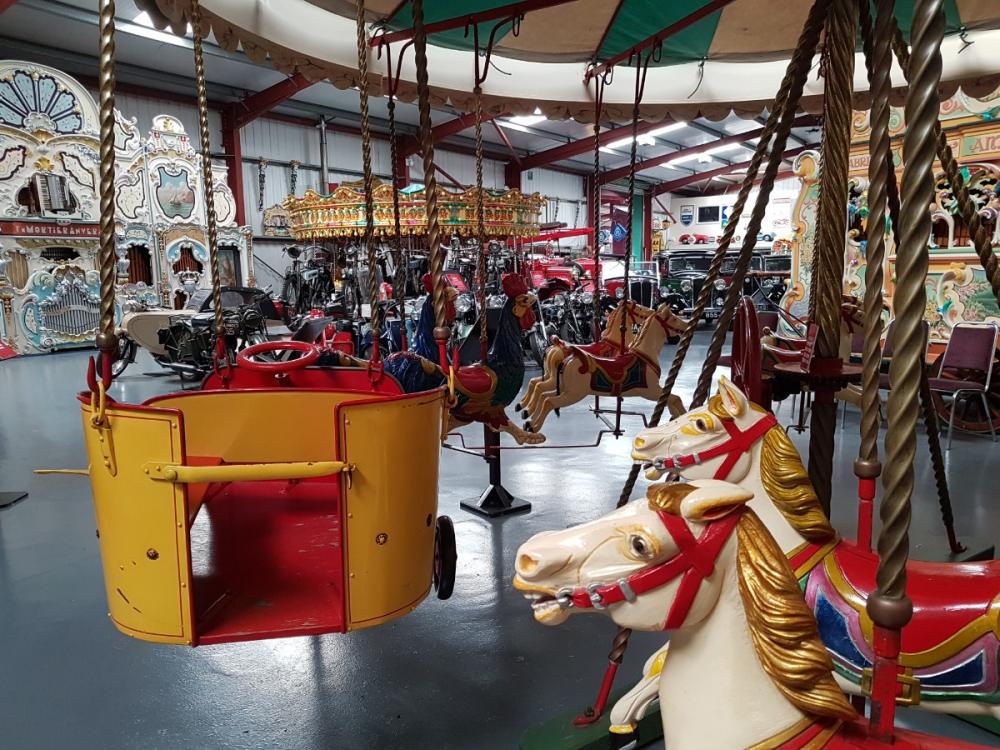 But, when you don’t even know of its existence, this stunning collection of vintage bikes, lorries and fairground organs – one of the finest in the UK – quite literally takes your breath away.

“I’m a Yorkshire lad, born and bred. How come I didn’t know about this place?” I quizzed retired coach driver and museum curator, Keith Kitching.

“We’re privately owned,” was his simple retort, followed by a more expansive explanation.

It was set up by farmer, Graham Atkinson in 2008 and, as a lover of all things vintage, he not only indulged his passion over the years – courtesy of a few quid purloined from campers eager to stay at one of his various holiday parks – but equally has ‘given back’ by opening this wonderful collection to the public.

However, the museum is not publicly funded and is owned by a ‘millionaire’, an occasional recipe for not being included in wider regional marketing, possibly the cause of its lower than deserved profile, although it has to be said that gentleman farmer, Mr Atkinson, has probably indulged his ‘hobby’ to the tune of millions of pounds, an investment that has certainly been to the public’s advantage many times over. 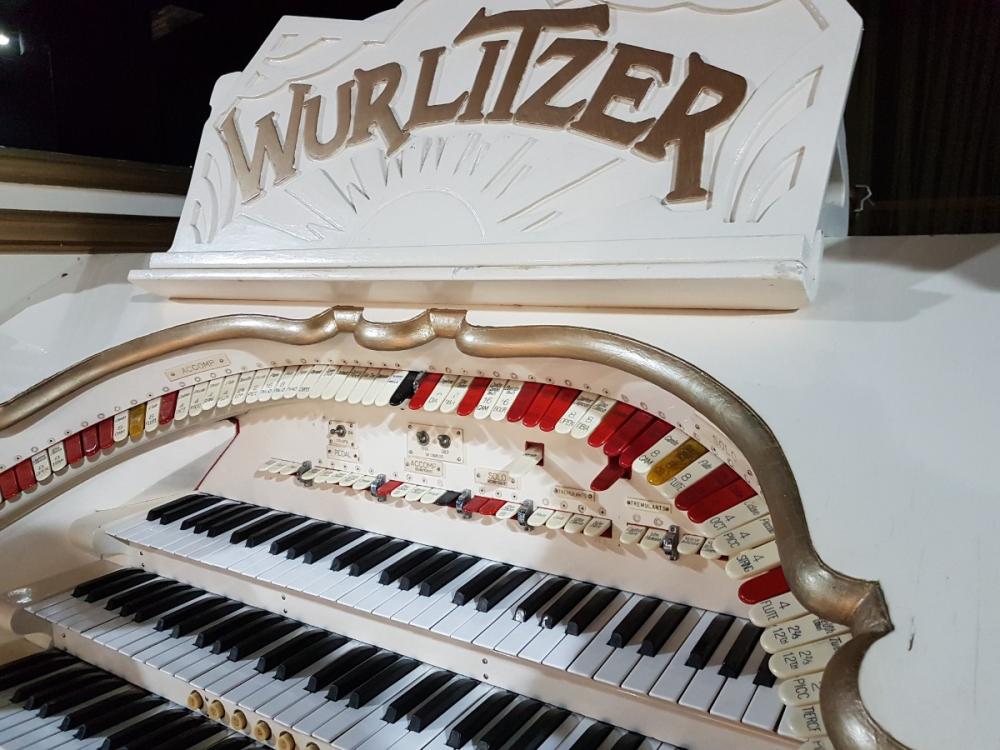 If ‘paddling your own canoe’ is what Atkinson’s museum has had to do over the years, according to Monsieur Kitching, then it has done a pretty impressive job and is certainly a jewel in the Scarborough crown. Miss this attraction at your peril.

As the pre-1912 Mortier 78 Key Dance Organ boomed its goodbye as though it would never see me again I bade a fond farewell to Mr Kitching with Bohemian Rhapsody ringing in my ears, and headed off for sustenance at the Bike & Boot Hotel’s Bareca bar and restaurant, but not before we had taken a quick stroll through the ever-present Peasholm Park. 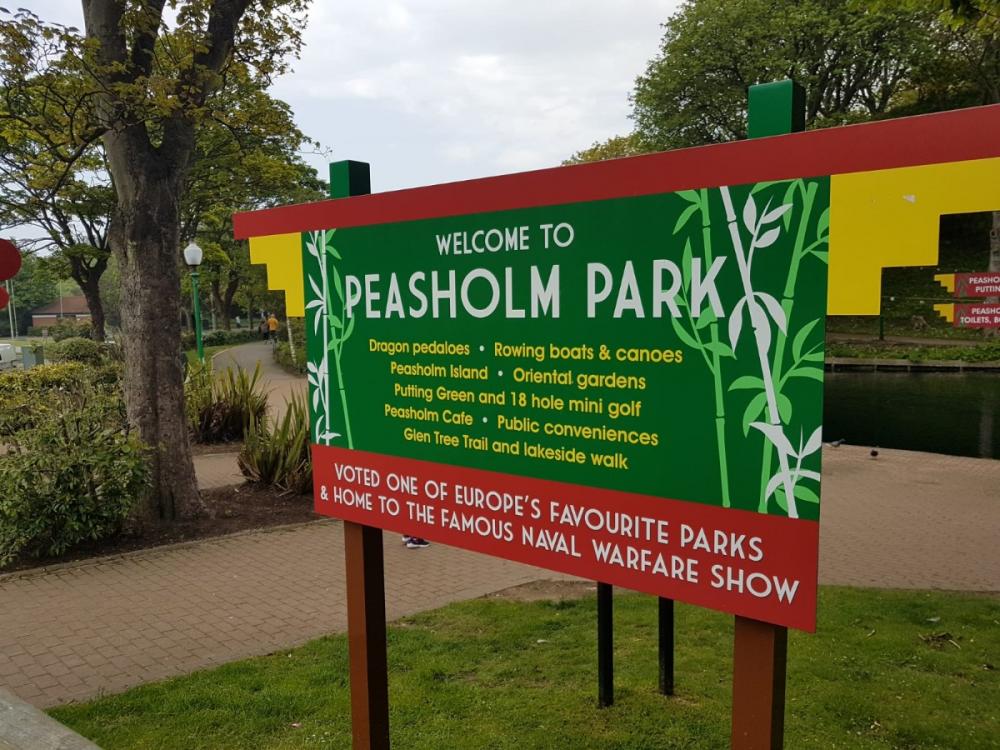 “They have battle ships here,” said my Filipino wife, almost agog as she read the park’s Welcome sign: ‘Home to the famous naval warfare show’. 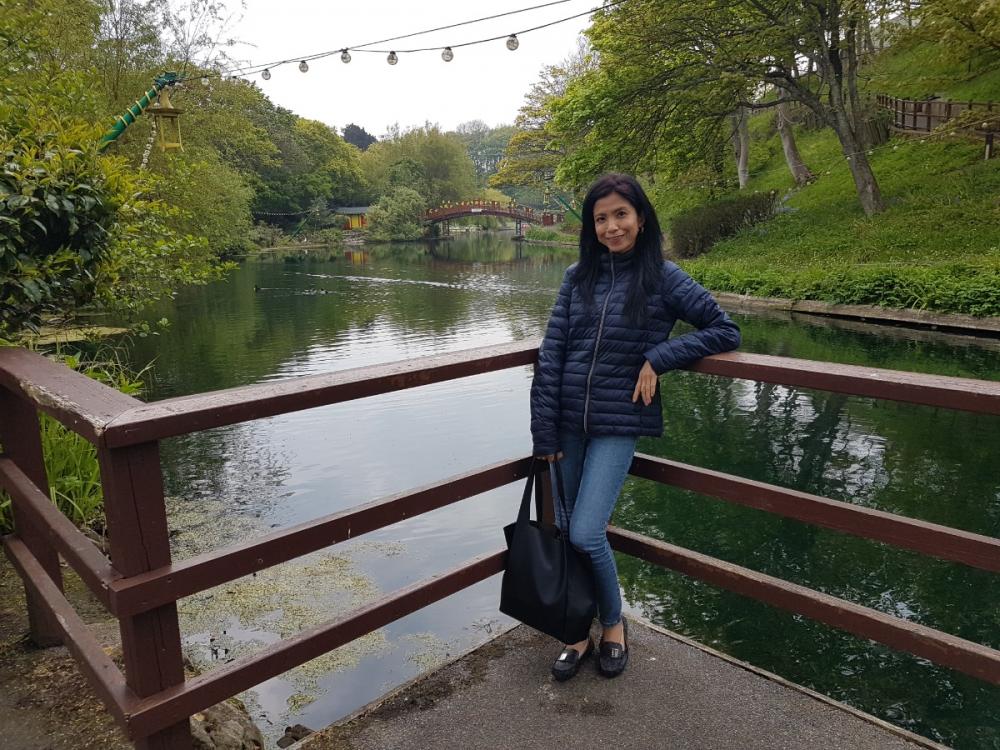 “Well, they’ve been there for ever…since I was a kid.

"Everyone knows about the battleships at Peasholm.” I added, stopping short of using the word ‘park’.

Clearly as the ‘Manila incomer’ she didn’t!

“They’ve even had Britney Spears over there,” I added, nodding to the town’s open-air theatre across the road, as if to impress with my superior knowledge. I regaled her with the story of when America’s dream girl swapped Las Vegas for East Yorkshire, and grown men had, apparently, turned up for her concert wearing blonde pigtails!

The Queen of Pop had also been spotted gulping down a McDonald’s although there had been fewer reports as to whether or not she had enjoyed the local delicacy of ‘haddock & chips’. The question would never be answered.

All this talk of food had left us gnawing at our jumper sleeves. Fortunately, one of the town’s newest eateries, the Bike & Boot Hotel’s Bareca Bar 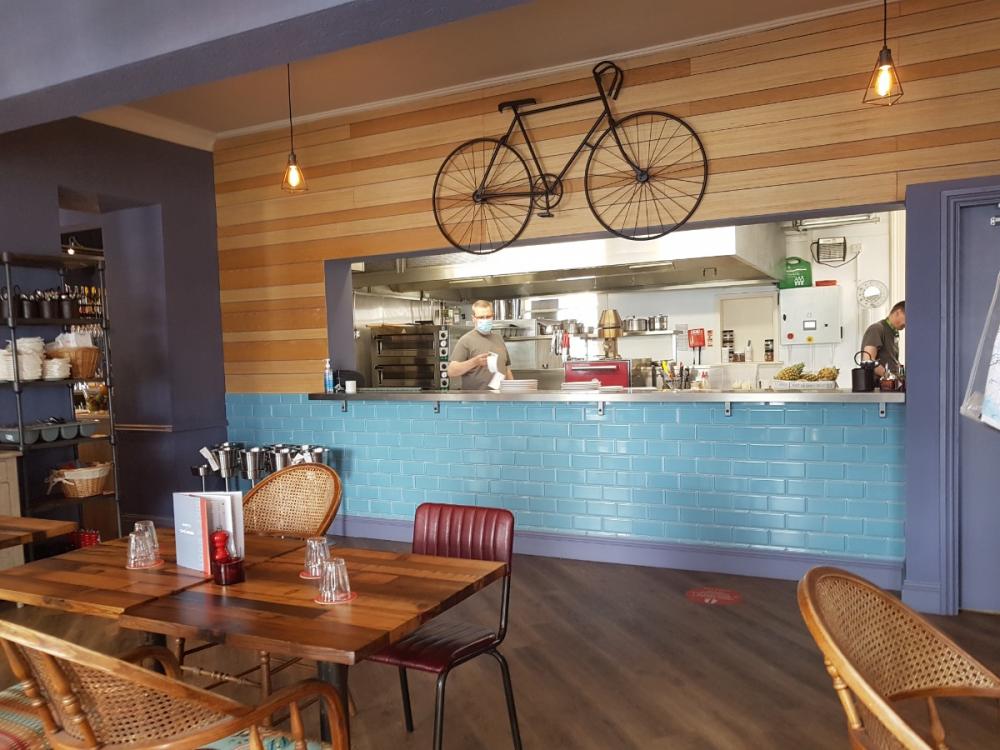 ...just across from the iconic Grand Hotel and its adjacent Victorian Funicular, was on hand with sustenance.

As well as providing a refuge for walkers, dogs and bikes, the hotel 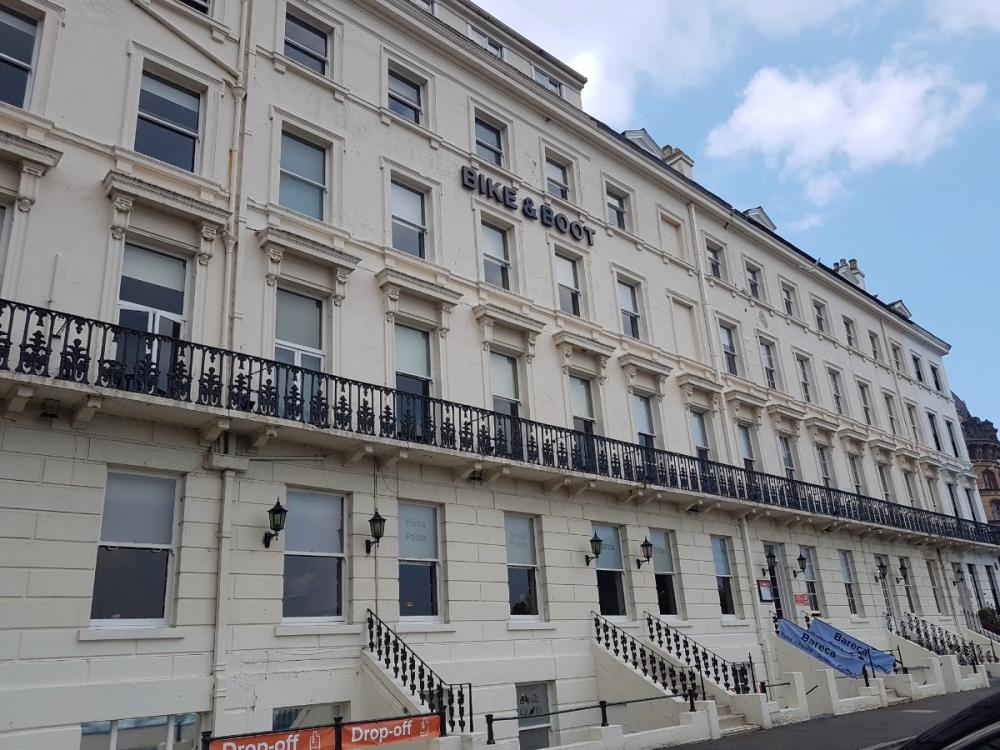 has invested heavily in its Bareca bar which offers well-priced, tasty food 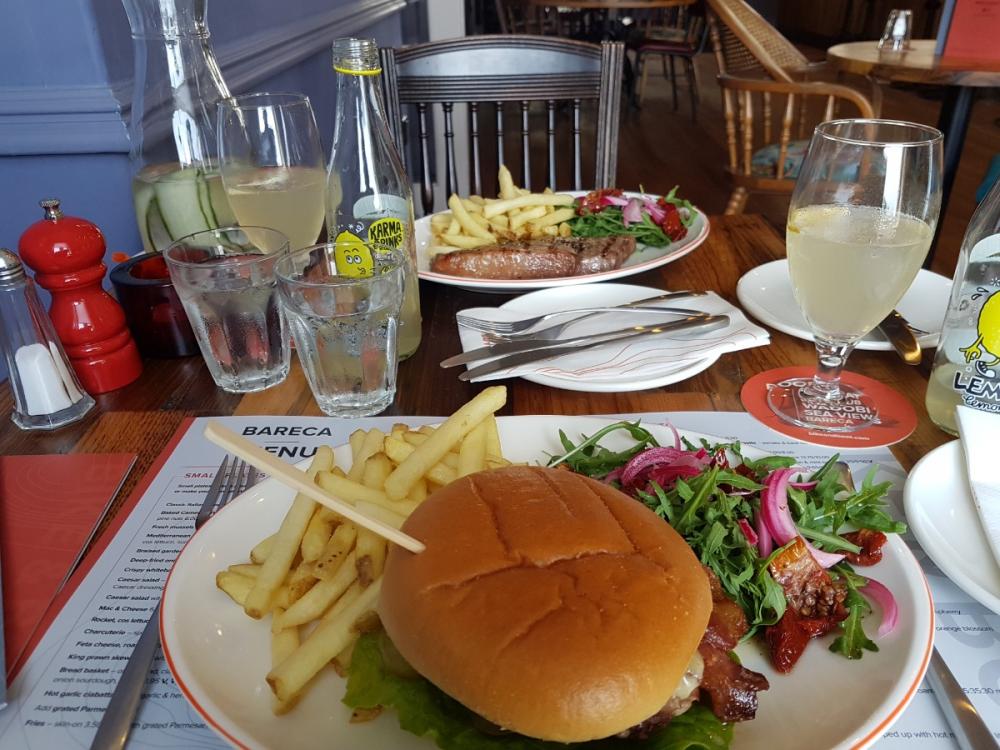 …and if you’re lucky to find a space, there’s even some parking outside. 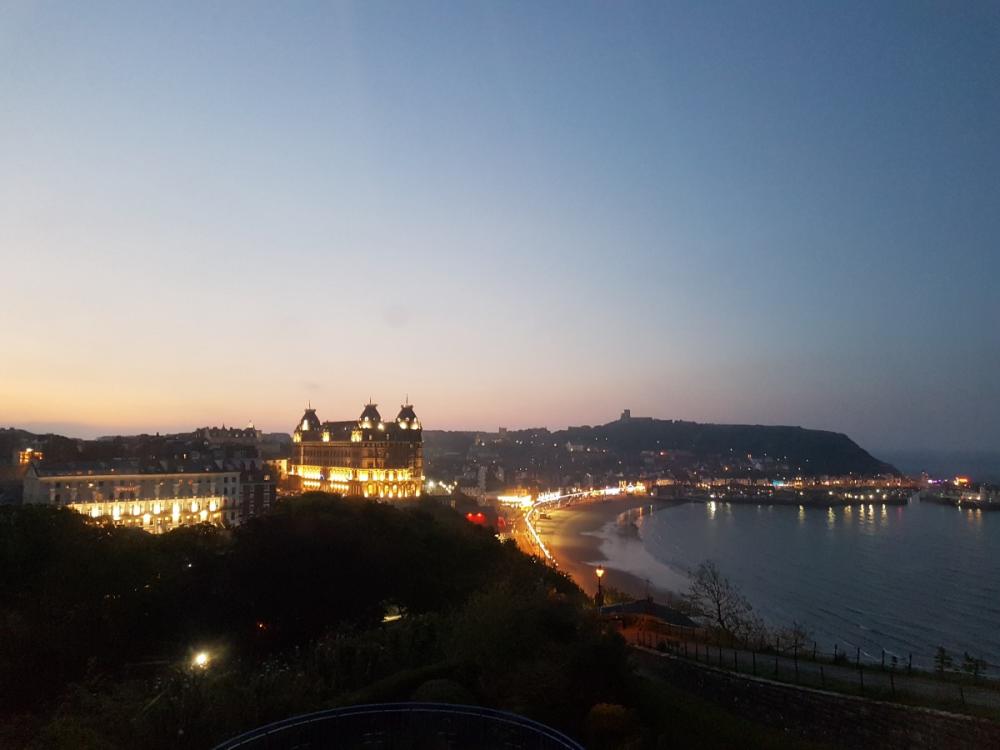 My wife’s exclamation said it all.

The early evening view of the South Bay from our room at the Esplanade Hotel was breath-taking. These days the property is owned by Daish’s Holidays and they have spent a considerable sum giving it a sizeable facelift, certainly in many of the large, spacious, Victorian rooms. 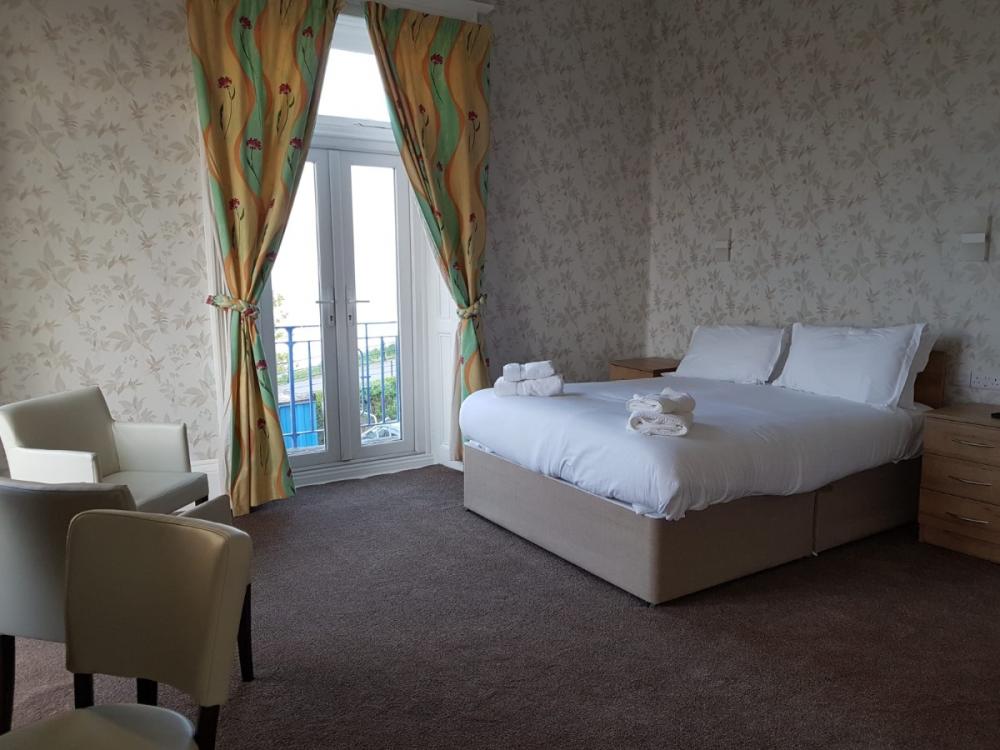 However, the company, which has a series of hotels across the country, largely operated as part of its coach holiday offering, still manages to keep its prices cost-effective by offering a ‘one sitting’ service at breakfast and evening dinner, normally around 8.30am and 6pm, a reflection of the older ‘early to bed, early to rise’ demographic!

This can place the small band of waiting staff under considerable pressure – even more so if some unwitting resident inadvertently ignores the allocated place settings – but, by and large, the system works well and there are few moans from a satisfied collection of ‘regulars’, many of whom have visited every one of Daish’s 10 destinations from Blackpool to Bournemouth, Weymouth to Torquay.

“We’d better get moving,” I urged Mrs H the following morning, “we’ve got to be in Whitby by 9.30am.” It was a Daish’s ‘departure’ day so many of the residents, already packed, had reported for an earlier than usual 8am breakfast. It meant that we were fed and watered by 8.30am and en route to Whitby’s railway station for the 10am steam train departure to Pickering. 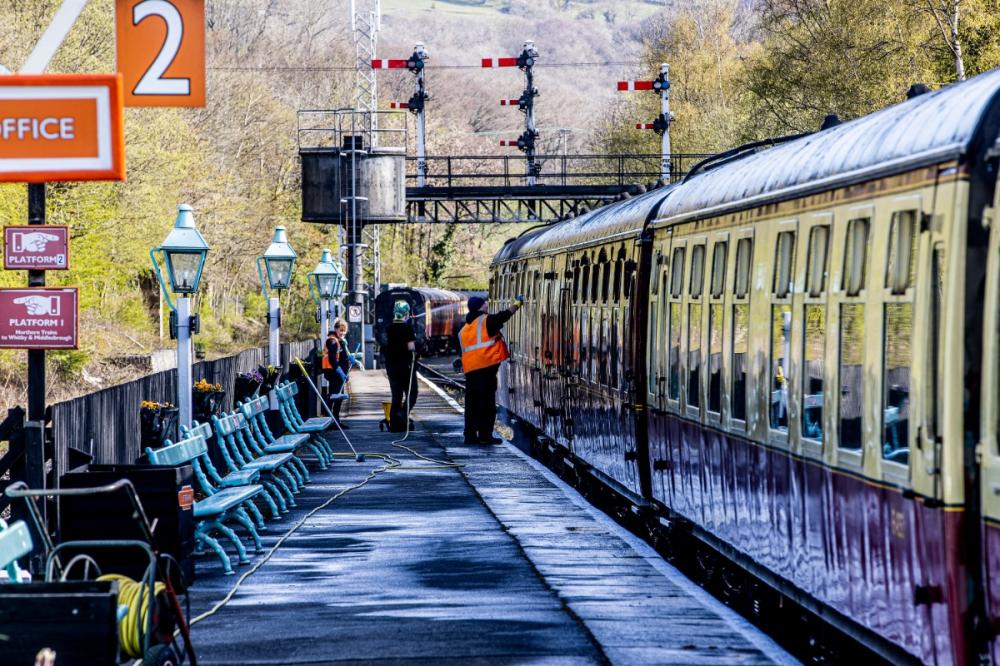 The North Yorkshire Moors heritage Railway works hard to promote itself and gleans many brownie points from its association with ‘Harry Potter’ – at least one of the hit movies was filmed on part of the historic line. 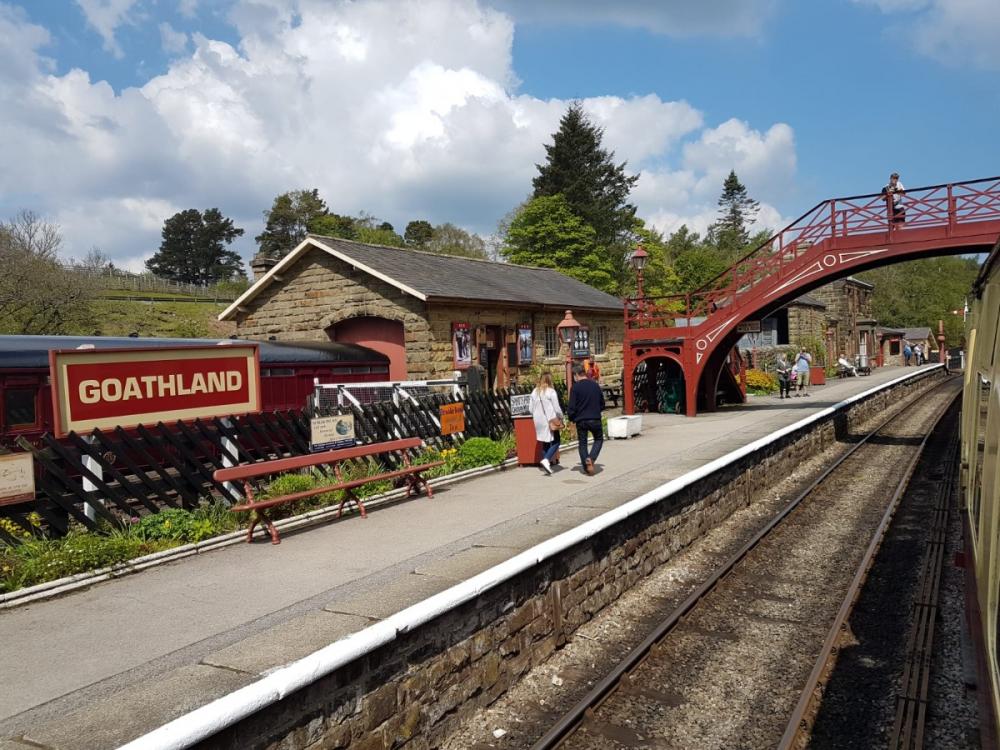 Its band of volunteers from guards to drivers, caterers to carriage repairers, are a joy: always willing to help, enthusiastic to the end.

And, the one and a half hour journey to Pickering 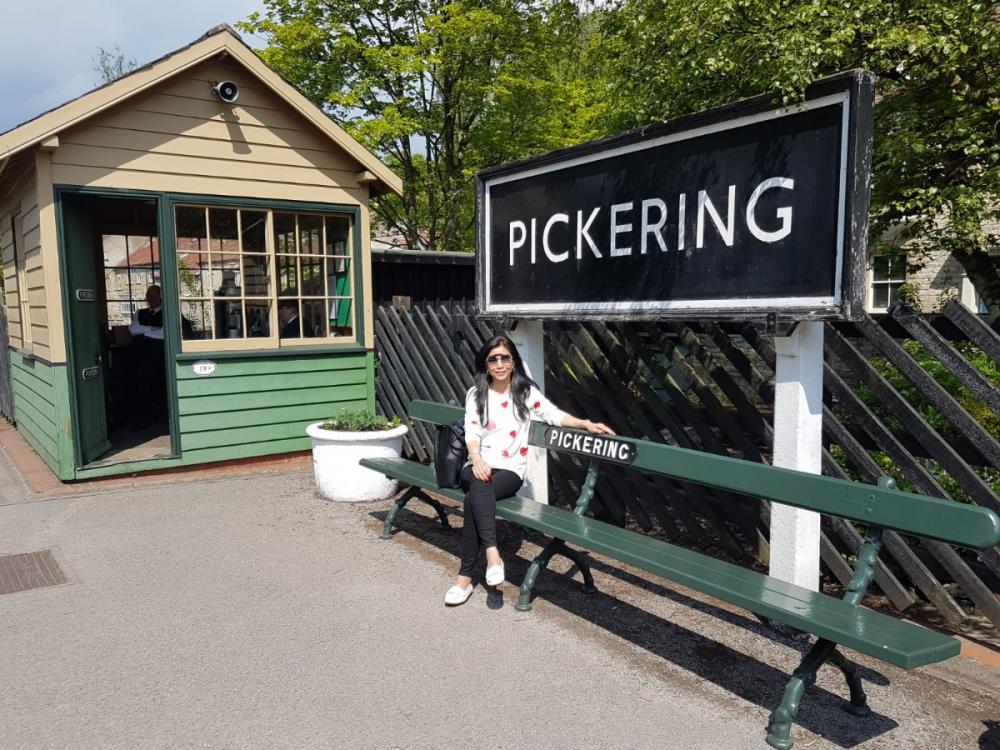 ... is visually spectacular. There are optional refreshments on board and chance for a three hour stay in the picturesque destination market town – we opted for an afternoon picnic – ahead of a 3pm return to Dracula’s favourite holiday destination.

Somehow or other the family autopilot had always taken me to Scarborough’s South Shore but, breaking with tradition, we checked out of the Esplanade Hotel shortly after 9.30am on the Sunday morning and headed across town to check out Sea Life 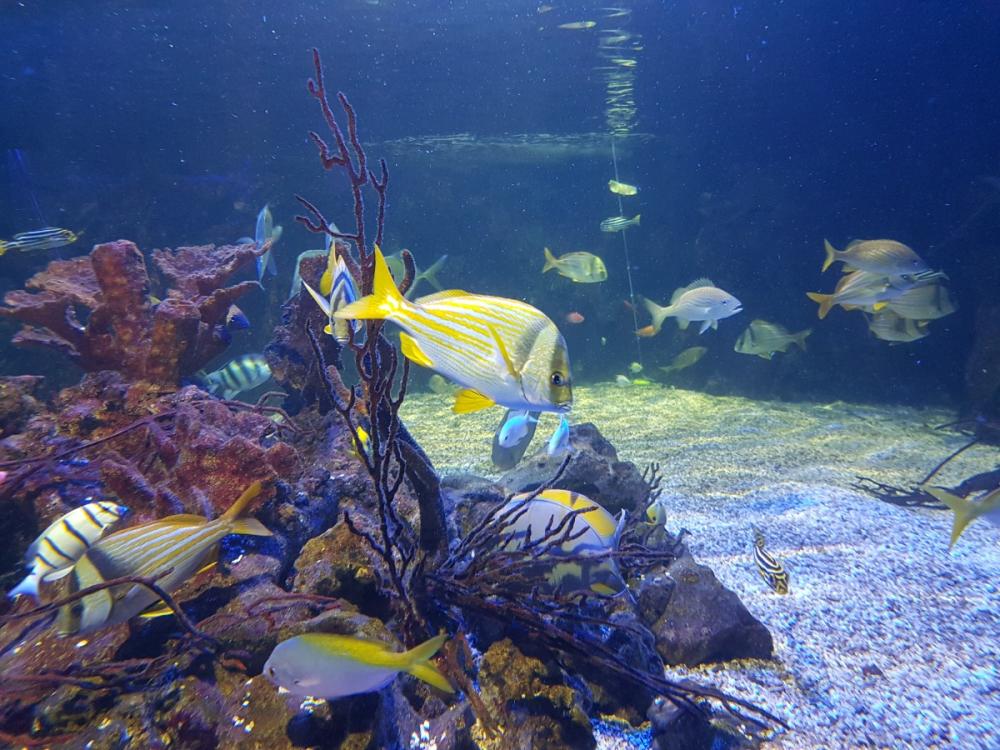 at Scalby Mills along with the Castle and the town’s beautifully coloured beach huts. 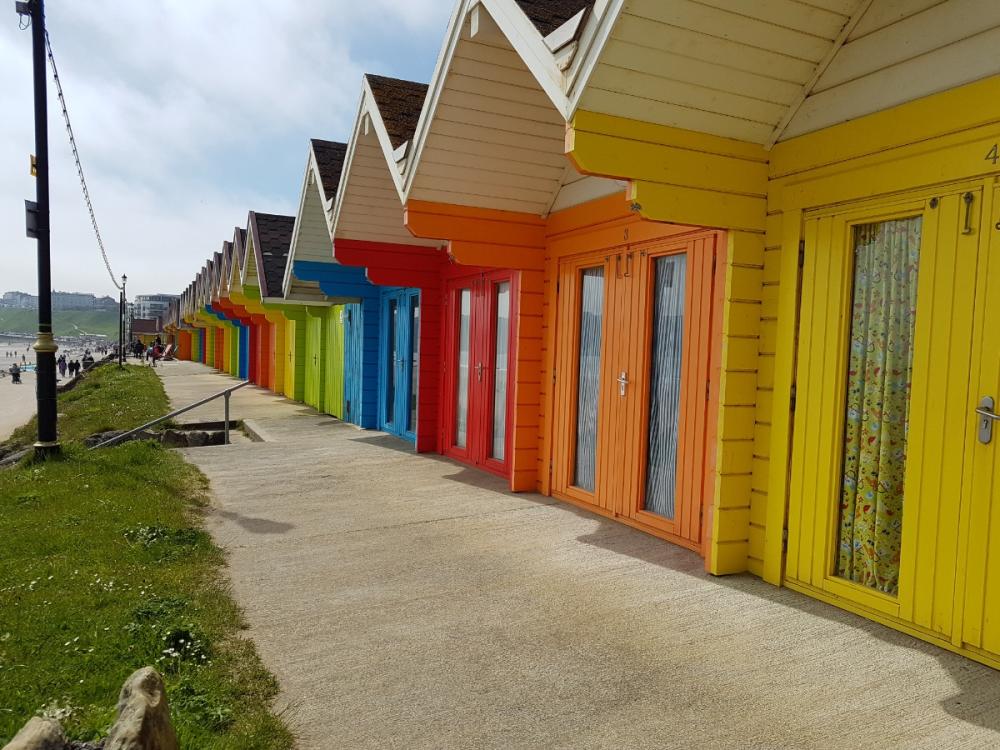 This side of Scarborough is more serene with its miniature railway ferrying people constantly to nearby Peasholm Park, expansive stretches of beach, and stunning parkland adjacent to the ancient Scarborough Castle.

On a grey day two nights on the East Coast would still be preferable to an extended lockdown in Leeds, however, throw in a bit of sunshine and some afternoon fish and chips at Farrer’s Restaurant in The Spa 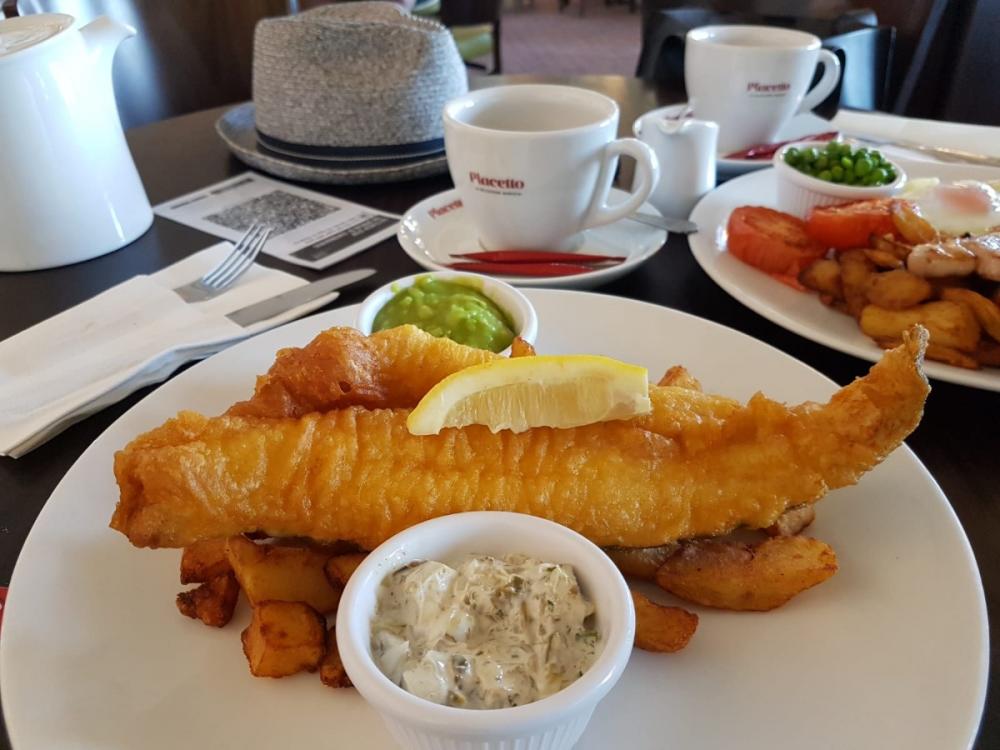 , and you could be duped into believing that the French Riviera had manifested itself from your dreams!

We hadn’t seen the Peasholm battleships, but Scarborough had loaned us its Castle, some spectacular scenery and given a Filipina called Princess a wonderful afternoon and the perception that she’d been somewhere special. 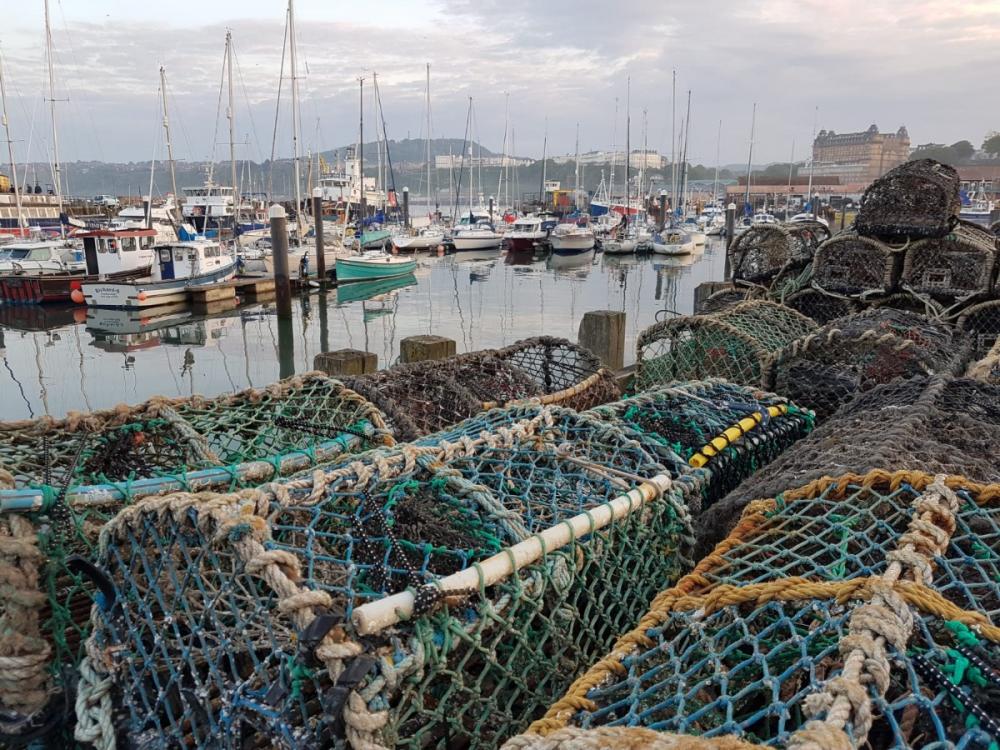 The Queen of Pop had been on the east coast, so had a Princess and, after a long break Scarborough made me feel like a King for the day. Twas a right royal welcome we ‘ad on’t East Coast. No wonder Britney had thrown caution to the wind and told Las Vegas to take a hike! She probably realised that there were better walks on't East coast!