Almost 100% Of People Have Antibodies After Second Vaccine

Over 207,337 participants took part in a home surveillance study for COVID-19 antibodies between 12 and 25 May 2021
Almost 100% of people tested positive for antibodies 14 or more days after their second vaccine dose, highlighting the importance of getting both doses for the best possible protection as restrictions are eased
Findings show vaccine uptake remained high in May

Imperial College London and Ipsos MORI have published their latest antibody surveillance report showing, almost 100% of people tested positive for antibodies 14 days after their second dose of the Pfizer and AstraZeneca vaccine.

Over 207,337 participants tested themselves at home using a finger prick test between 12 and 25 May 2021, tracking COVID-19 antibodies across England following either natural infection or vaccination. 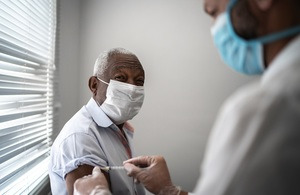 Following one dose of either vaccine, the proportion of people testing positive for antibodies peaked at 4 to 5 weeks after first dose and then started to decline before rising substantially in those who had a second dose. The findings emphasise the need for everyone to get both doses of the vaccine to receive the best chance of protection against this disease as restrictions are lifted.

The government’s vaccination programme has ramped up significantly since this report took place. Over half of young people aged 18 to 24 in England have now received a first dose, just a few weeks after the programme was opened to this age group, and second doses have been accelerated for all over 18s by reducing the dosing interval from 12 weeks to 8 weeks. The government is on track to offer every adult a first dose of the vaccine by 19 July and has already given 2 doses to two-thirds of all adults.

Health and Social Care Secretary Sajid Javid said:
"Every vaccine is another brick in our wall of protection and I’m incredibly pleased that the latest data from REACT shows almost 100% of people tested positive for antibodies after their second dose of the vaccine.

"This is a testament to the very high level of protection the vaccine provides – with 46,000 hospitalisations prevented and 30,000 lives saved.

"I urge everyone to come forward for the vaccine, regardless of your race, religion or background. It could save your life and protect your loved ones, and getting the second jab will help us all return to doing the things we love." 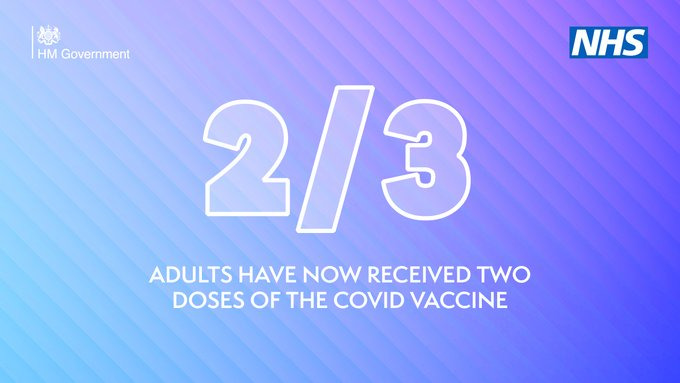 Vaccines Minister Nadhim Zahawi said:
"It is incredibly reassuring to see nearly every single person who took part in the REACT study developed detectable antibodies following 2 doses of the vaccine. It goes to show once again how 2 doses are vital for the best possible protection.

"Our vaccination programme is working and is severely weakening the link between cases, hospitalisations and deaths. We are continuing to make strong progress in boosting uptake for people living in deprived areas, as well as black and minority ethnic communities by working closely with faith and local leaders.

"As we lift restrictions next week, I urge anyone who has yet to be vaccinated to get both jabs to protect yourselves and your loved ones. Vaccines are safe and have so far prevented around 8 million infections, over 46,000 hospitalisations and around 30,000 deaths."

Professor Helen Ward, Professor of Public Health at Imperial College London, said:
"Results of this very large study show the substantial impact of the vaccination programme on antibody positivity in adults. However, coverage of vaccines is uneven with people in some groups and areas less likely to have been vaccinated.

"It is concerning that people on low incomes, in deprived areas, some minority ethnic groups and in some public facing occupations such as hospitality, may remain relatively unprotected from future spread. We need to continue and intensify efforts to reach these groups with vaccination, and to ensure other protective measures are in place."


Other findings from the study show:
prevalence of antibodies was 30% lower in men than women. This is in part due to uptake of the vaccine as 75% of women had received at least one vaccine dose compared to 70% of men. Women also showed a higher antibody positivity after a single dose of vaccine in comparison to men
people in most deprived areas were least likely to have had a vaccine
there was higher vaccine uptake in the highest income households
those who work in retail, hospitality, and personal care such as hairdressing were 20 to 30% less likely to have been vaccinated than other workers
compared to participants reporting white ethnicity, there was a 14% higher vaccine uptake in those reporting Asian ethnicity, and a 60% lower reported uptake in people reporting Black ethnicity
people who had previous COVID-19 were 40% less likely to be vaccinated than those with no history of COVID-19

Professor Paul Elliott, director of the REACT programme from Imperial’s School of Public Health, said:
"Antibodies play an important role in protecting against future illness, which is why our REACT programme has been tracking coronavirus antibodies in the population since early on in the pandemic. So it’s very encouraging to see a greater than fourfold increase in antibody prevalence since our last findings in January, highlighting the impact of the vaccination programme. More importantly, our findings also reinforce the need to get fully vaccinated to protect yourself and those around you."

"Antibodies play an important role in protecting against future illness,
The government is expanding its community champions scheme so that communities have trusted local leaders who can help answer questions about the vaccine and work with the NHS and public health teams to support local communities. £23 million funding has been allocated to 60 councils and voluntary groups across England to expand work to support those most at risk from COVID-19 and boost vaccine take up. Community leaders are being urged to make clear an NHS number is not needed to get a jab and that there are a large number of vaccination sites spread right across the country that people can go to. Over 98% of the UK population now lives within 10 miles of a vaccination site.

The government also accepted the Joint Committee on Vaccination and Immunisation (JCVI) guidance encouraging local flexibility in delivering vaccines to groups with lower uptake, including those not registered with a GP surgery. As such, local systems should have a plan in place for full coverage of all health inclusion groups, for example people not registered with a GP, people experiencing homelessness, refugees, asylum seekers, people with addictions, and people who frequently attend A&E.

It is also working with community leaders and charities to deliver pop-up vaccination sites, including at places of worship or sports grounds, to encourage vaccine uptake.

Recognising that accessibility can be a factor in vaccine uptake, the NHS is also supporting the work of local vaccination services – such as a mobile facility for people who cannot leave their home – to ensure that people with either seen or unseen disabilities can access a vaccine safely and easily when it is their turn.

We are also taking steps to promote vaccine uptake among those caring for some of the most vulnerable in our society, including health and social care staff, and continue to monitor how effective these measures are.

In total, 34,997,491 million people in the UK have now received both doses of vaccine, and the government remains on track to offer a first dose to all over 18 year olds by 19 July.

Vaccine uptake and SARS-CoV-2 antibody prevalence among 207,337 adults during May 2021 in England: REACT-2 study.