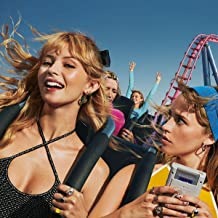 2018 will take a lot to top for Belgian pop sensation Angèle. While she may have made her chart debut in Belgium a year earlier with La Loi de Murphy, it was 2018 that saw her claim her first number 1 on both the Belgian and French singles charts with Tout oublier (which was a family affair featuring her brother Roméo Elvis), while her debut album Brol peaked at the same position. Now 5 times Platinum in her home country and 2 x Diamond in France, Having set the bar incredibly high, Angèle has finally unveiled her long-awaited sophomore release - Nonante-Cinq.

Having collaborated with Dua Lipa on the international hit, Fever, last year, it is clear that Nonante-Cinq has more direct pop leanings than its predecessor, but they do not override the core sound that made Angèle insanely successful on her own terms. Nonante-Cinq is a very different beast to Brol, but it balances radical changes with
safe similarities to ensure its success.

Written and recorded in the wake of her relationship with Marie Papillon, it would be fair to say that on first listen this feels like a liberating post-break-up album. However, while the eighties synth drive of Libre certainly delves into the personal journey post-relationship, it can also be equated with the global feeling post-lockdown. However, it is both Pensées positives and Taxi are the most direct in terms of her personal life, which offer a raw and real take on life woes.

However, Angèle is not there to simply wallow. The party of Profite and experimentation of both Demons and Tempête show that she has not lost sense of self or her will to fight.

Nonante-Cinq is an album by an artist who has grown immensely since their debut release. Unafraid to show her flaws and feelings, Nonante-Cinq is a strong contender for album of the year.