70% Of Walkers Have Broken The Countryside Code 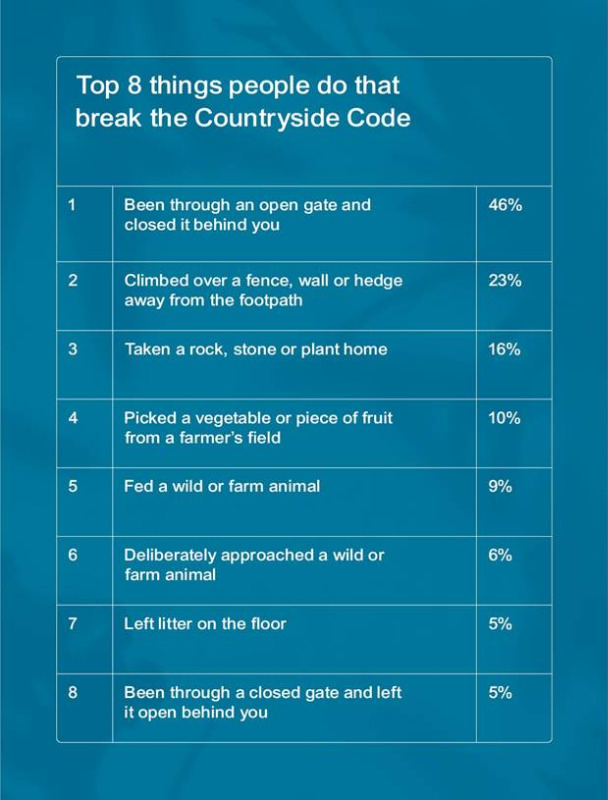 Seven in ten (70%) people in England and Wales are breaking the Countryside Code when they go out walking, but the vast majority are doing so without realising, a new report has revealed.

Rohan has been inspiring people to adventure into the great British countryside since 1972, so as part of its 50th anniversary, the company is launching a range of initiatives to help raise awareness of and protect the spaces that the public know and love.

The report surveyed over 1,800 walkers on their knowledge of the Countryside Code, and what they do to protect their favourite natural landscapes.

The most common way that people breach the Code, which advises people on how to enjoy and protect the countryside by acting responsibly, is by going through an open gate and closing it behind them (46%).


Sam Durham, Chief Land Management Adviser at the National Farmers’ Union (NFU), explains how this seemingly innocent action can cause issues:
“Generally, a gate is closed or open for a reason, and it has been left that way by the farmer. It may be left open to give livestock access to food and water, or because
they are working in the field and require regular access.”


The second most common violation is people climbing over fences, walls or hedges away from the designated footpath (23%).

However, the study found that the majority of people are likely breaking the Countryside Code unknowingly.

Just one in eight (12%) respondents said they know exactly what the guidelines involve, and almost half (48%) have no knowledge at all, or aren’t sure.

Unsurprisingly, people who walk frequently are far more aware of the Code than those who don’t. Those who walk in the countryside every day are five times more likely to have some knowledge of the regulations than people who never do (77% vs 16%).

Interestingly, millennials (25-34s, 61%) are the most likely generation to have some awareness of the Code, yet admit to breaking its rules more than any other age group. Almost three-quarters (73%) have breached at least one aspect of the Code while out walking.


Giles Polito, Marketing Director at Rohan, said:
“Since our launch in 1972, we’ve always worked to inspire people to enjoy the great outdoors and all it has to offer, and it’s been fantastic to see more walkers than ever enjoying the British countryside in recent years. That being said, taking small changes to our behaviour now will play a vital role in protecting these spaces for years to come, which is why the Countryside Code is so important.

“It offers advice on how we can all help to care for our natural environments so that they can be appreciated by future generations.

“In addition, as part of our 50th anniversary plans looking ahead to the next half century of UK adventure, we’ve consulted with the NFU to help spread the word about the importance of the Code, and help walkers play their part in protecting our amazing countryside for all to use, benefit from and enjoy.”

To see the full report, including additional data, expert comments and a quiz where people can test their knowledge of the Countryside Code, visit:
https://www.rohan.co.uk/explore/big-walking-survey