£257 Million To Save 1385 Theatres, Arts Venues, Museums And Cultural Organisations Across England 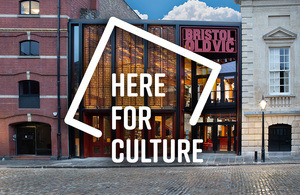 More than 1,300 arts and cultural organisations are benefitting from a share of £257 million as part of a vital financial boost from the Government’s £1.57 billion Culture Recovery Fund, Culture Secretary Oliver Dowden has announced.

Organisations that applied for grants under £1 million in the first round of the Culture Recovery Fund were informed this morning of their awards by Arts Council England which is distributing funding on behalf of the Department for Digital, Culture, Media and Sport.

The allocation is the biggest tranche of funding distributed to date from the Culture Recovery Fund, bringing the total amount of grant funding awarded so far to more than £360 million. Further funding for organisations is due to be announced in the coming days and weeks.

It will boost iconic organisations and venues known around the world, such as the London Symphony Orchestra, the Bristol Old Vic Theatre and Liverpool’s Cavern Club. It will also protect hundreds of local organisations that have launched many stars of the British cultural scene and sit at the heart of their communities. This includes the Finborough Theatre in Earl’s Court, London, Beamish Living Museum in County Durham, the Northcott Theatre in Exeter, the Yorkshire Sculpture Park in Wakefield, and The Young Vic in London.

This funding will help allow performances to restart, venues to plan for reopening and help protect jobs and create opportunities for freelancers.

"The government is here for culture and we have worked around the clock to get this record investment out to the frontline.

"It will allow our wonderful theatres, museums, music venues and cultural organisations to survive this crisis and start putting on performances again - protecting jobs and creating new work for freelancers.

"This is just the start - with hundreds of millions pounds more on the way for cultural organisations of all sizes that still need our help."

"Theatres, museums, galleries, dance companies and music venues bring joy to people and life to our cities, towns and villages. This is a difficult time for us all, but this first round of funding from the Culture Recovery Fund will help sustain hundreds of cultural spaces and organisations that are loved and admired by local communities and international audiences. Further funding will be announced later in the month and we are working hard to support creative organisations and individuals during these challenging times."

"We sincerely welcome the support from DCMS and are very grateful to receive this significant grant from the Culture Recovery Fund. It was my pleasure to welcome the Culture Secretary to the RAD today, in this our Centenary year, and introduce him to our students who will go on to join our network of RAD teachers, who empower young people in the UK and worldwide with our leading ballet training. We cannot overestimate the value of arts and culture in our lives, and its ability to build community, resilience and bring joy."

"It’s such a relief then to see these significant funds now reaching organisations who want to begin making work for their communities to enjoy.

"It’s also important that these theatres are spread nationwide, are big and small, and include venues like the tiny Finborough pub theatre - which is where I cut my teeth and wouldn’t be a playwright or screenwriter without it."

London Symphony Orchestra (LSO) will receive £846,000 to help them begin a phased return to full-scale performance. The LSO has established an international reputation as one of the top orchestras in the world and through its extensive touring the LSO plays a key role in promoting Britain as a leading exponent of artistic excellence.

"We have refused to let live music be silenced, but it cannot survive on energy and optimism alone. Today’s announcement is incredibly important for orchestras and the whole live music sector, threatened with devastation by the effects of the pandemic. We need, and are grateful for, this support as we take our first steps in public performance once more, enabling us to show the full power of our creative community."

Organisations that will be receiving funding in the North include:

Hallé Concerts Society, Manchester - £740,000 will support the organisation to live stream fortnightly concerts from the Bridgewater Hall in Manchester.

The Hallé, established 142 years ago, has the world-renowned Sir Mark Elder as its Music Director. Over a quarter of a million people heard the Hallé live last season. It’s education programme reaches tens of thousands of people and it strives to create a wider enjoyment and understanding of music throughout the community.

Royal Liverpool Philharmonic - £748,000 will enable the orchestra to provide a short, socially distanced programme, all of which will be recorded to stream at a later date.

It is the oldest continuing professional symphony orchestra in the country with its origins dating to 1840. The Royal Liverpool Philharmonic was the first orchestra to create its own recording label and has collaborated with international artists such as Sir Paul McCartney, Elvis Costello and OMD.

Cavern Club, Liverpool - £525,000 will fund the recording of local musicians’ live performances which will be streamed digitally to provide opportunities for local artists and technicians.

The Cavern Club, one of Liverpool’s top tourist attractions, is the place where The Beatles musical identity was formed and now a thriving live music destination showcasing up and coming bands and established artists.

Beamish, the Living Museum of the North - Co Durham £970,000 to support the business through the winter and restart a capital project. Beamish preserves examples of everyday life in urban and rural North East England at the climax of industrialisation in the early 20th century

Beamish has been seen on screen in many shows including Downton Abbey and Dark Angel. Perennial children’s favourite Blue Peter has visited several times and it’s also been seen in Fred Dibnah’s Victorian Heroes, Ant & Dec’s A History of Tyneside and the Antiques Roadshow.

Yorkshire Sculpture Park, Wakefield £804,013 to help the park to adapt its buildings to new regulations and help it continue to reopen safely.

Yorkshire Sculpture Park shows work by British and international artists including Henry Moore and Barbara Hepworth. Its collection of the works by Moore is one of the largest open-air displays of his bronzes in Europe.

Theatre by the Lake, Keswick, Lake District, £878,492 to support the theatre - one of the biggest employers in the area - to help cover losses as a result of coronavirus. Set on the edge of Keswick, amid the magnificent western fells of the Lake District, it has two stages - a 400 seat Main House and 100 seat Studio.

Theatre by the Lake opened on the shores of Derwentwater in August 1999 as a permanent replacement for the Blue Box, an extraordinary mobile theatre created after the Second World War to take plays to towns and cities with no active theatres. Dame Judi Dench is its patron.

Storyhouse, Chester was voted the UK’s Most Welcoming Theatre 2019/20 in the UK Theatre Awards.

The Brudenell, Leeds - £220,429 to host a free weekly event as well as stream events working with partners such as Music:Leeds and Made With Music.

The Brudenell Social Club is a centrepiece of the Leeds music scene. Famous for hosting secret gigs for bands like Franz Ferdinand and the Kaiser Chiefs, it hosts events most nights of the week, which are put on by a variety of local promoters and which cover a wide spectrum of genres.

The Georgian Theatre Royal, Richmond - £52,960 will help the theatre to provide tours of the building and restart its youth theatre virtually.

Built in 1788, the Georgian Theatre Royal is Britain’s oldest working theatre still in its original form. The theatre also houses an accredited museum collection and has strong ties to York University which uses the venue for academic events such as recreating Georgian productions. Dame Judi Dench is its president and Their Royal Highnesses The Prince of Wales and the Duchess of Cornwall are its patrons.

Heugh Battery Museum, Hartlepool - £71,573 will fund vital conservation work on the collection at the UK’s only open air museum dedicated to the First World War.

The Heugh Battery Museum sits on the site of the only First World War battlefield in Britain and tells the story of the Bombardment of the Hartlepools, which took place on Wednesday 16th December 1914.

The sites are the main visitor attractions for Oakham and important event venues for local community groups in Rutland, which is the smallest county in the country.

Today’s announcement will be followed by further allocations of grants and loans to successful applicants to the government’s £1.57 billion Culture Recovery Fund in the coming days and weeks.