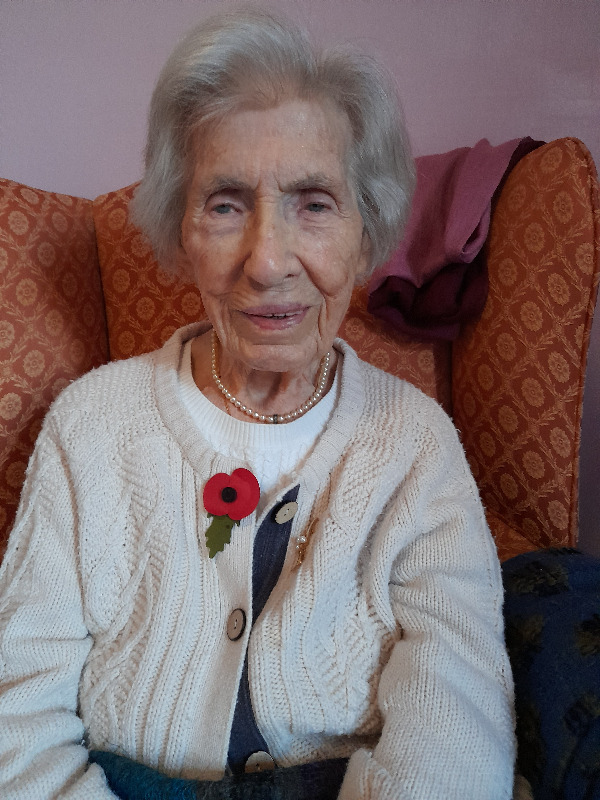 Helen Jewitt (née Tocher), aged 103
8th December 2021 will mark the 80th anniversary of conscription of women for the first, and fortunately, the only time in British history.

This presents a remarkable opportunity to tell the story of 103 year old, Glasgow-born female veteran, Helen Jewitt, who served in WW2: one of the last remaining and exceptional female conscripts who shaped British history and carved out new roles in society, as well as in the military.

During her time in the ATS regiment, Helen served all over the UK, including at Frinton-On-Sea, Essex, where she recalls hearing the terrifying sound of enemy V-1 bombs, known as doodlebugs, and waiting to hear the engine cut out before running for shelter. (At their peak, over 100 a day were fired at SE England).

Helen’s final posting was York, where she was tasked with clothing the men who had been demobbed. There, she met a young Denis Jewitt from Middlesborough, who became her husband. Now aged 103, Helen is still living in York.

Helen Jewitt in the ATS

Received her call-up papers for National Service in 1942, heading to Edinburgh for her basic training.
Worked as a cook for 3 years in the ATS, traveling to different camps around Britain.
Her training and service took her from Glasgow to Edinburgh, Aldershot, London, Ty Croes in North Wales, Frinton on Sea, and York.
At Frinton on Sea, Helen recalls the doodlebugs overhead, waiting to hear the engine cut out before running for shelter.
One day a messenger arrived with some plans, and an officer called Helen into his office and showed her a diagram of a doodlebug. This was the first time the British had any info on the bomb.

Helen is a member of the WRAC Association, the national military charity which supports women who served in the ATS and Women's Royal Army Corps. Women of all ages, ranks and experience come together to share their stories and experience the camaraderie they once felt within their Corps, whether they meet in person through the various branches and interest groups across the UK, or enjoy phone contact, benevolence support or the Association magazine.

The WRAC Association also works to highlight the disadvantages some women experience to this day as a result of their service. If you or someone you know would benefit from knowing more about the WRAC Association, please visit wraca.org.uk.